Every year, industry experts meet for a week to develop safety standards for boats. Here's what came out of the last meeting. 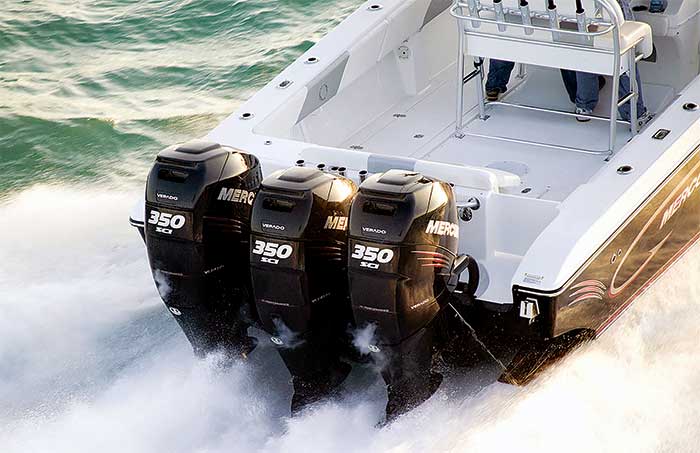 Bigger and stronger motors mean more stress on the rigging, particularly steering components. The industry is reviewing standards for rigging triple and quad outboards to provide additional guidance to manufacturers who offer installations like these. (Photo: Mercury Marine)

One day, if you have time, look through the Federal Motor Vehicle Safety Standards and Regulations. You'll find hundreds of federal laws that cover almost every aspect of a vehicle, extending to trucks, motorcycles, and even boat trailers. But try searching for boat-safety regulations; you won't find many. The U.S. Coast Guard has laws that regulate a few items, such as gasoline fuel systems, navigation lights, and capacity and flotation, but there aren't many federal government regulations that apply to building recreational boats. Why? Because decades ago, the industry came together to head off what could have been hundreds of automotive-type regulations by promising to police themselves. For the most part, they've done a good job.

The American Boat & Yacht Council (ABYC), formed in 1954, is the organization that writes safety standards used by most boatbuilders, surveyors, and boatyards. Unlike federal regulations, the ABYC guidelines are voluntary and considered minimum standards. Without the force of federal law behind them, you'd think that there'd be little to compel manufacturers to adhere to ABYC standards, yet the majority of boats built in the United States comply with all or most of them. But if a manufacturer is ever brought into court for a liability issue — if, say, someone is hurt when a new boat catches fire — the court, in the absence of legal regulations, will usually consider ABYC standards as the custom of the industry, as if they were actually required by law.

Who Writes These Standards?

Throughout the year, ABYC convenes volunteer committees of boatbuilders, accessory manufacturers, marine surveyors, representatives of the U.S. Coast uard, and other interested organizations to create rigorous new guidelines and to improve existing ones. BoatUS sends staff to represent our members on several of these committees and works on them behind the scenes all year long. Then, once a year, the ABYC Technical Committees convene for a week to hammer out as many new and improved standards as possible. As new products and technologies become available, they must be examined to see how they may affect existing standards. As new information is gathered — by, say, analyzing BoatUS Marine Insurance claims files — that data can be presented to the committees to improve the standard. The process is driven by a common goal: building boats that keep you and your family safer. At the last series of ABYC meetings, the following important areas were addressed. 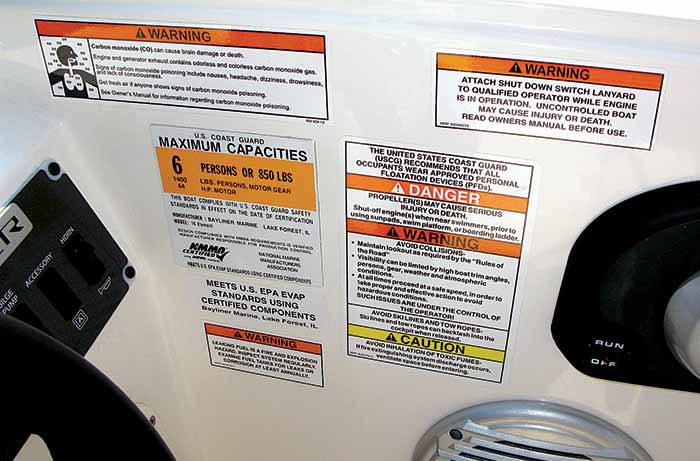 The industry is working to reduce the number of safety labels on the boat by creating a universal label that provides a consistent message.

On Fourth of July weekend, 2012, the 34-foot cabin cruiser Kandi Won capsized with 27 people aboard; three children died. The skipper of the boat said he was unaware that having eight people on the upper deck could cause enough instability to capsize the boat, which also was rocked by large wakes as it was heading home. The investigation revealed that the boat's upper deck was severely overloaded, causing the boat to heel past the point of no return, spilling everyone into the water. If you've been in a small boat, you've probably seen capacity labels that help skippers prevent overloading those boats, but no such guidance is available for skippers of larger boats.

An inexperienced captain could easily overload a boat, unaware that capsize could be only one large wave away. The ABYC Hull Performance committee is working on developing weight limits for upper decks on larger boats — similar to existing capacity limits for smaller ones. When finalized this year, the standard would require builders to prominently display a label specifying how much weight can safely be on an upper deck without adversely affecting stability. Some manufacturers, such as Sea Ray, are proactively labeling upper-deck capacity. Knowing how many crew can safely be on a flybridge could prevent a tragedy.

Lithium-ion batteries are ubiquitous these days; your laptop and cellphone almost certainly have them, and billions are sold every year. For the most part, they've got a pretty good safety record. But not long ago, the entire fleet of Boeing 787 Dreamliners was grounded due to Li-ion battery fires, and there are frequent reports of smaller fires from devices that use these batteries. The recreational-boating market has begun offering these batteries to boat owners; sailors in particular like the weight savings of as much as 75 percent. But because these batteries are a new technology, no standards yet exist specifically addressing how to install or maintain lithium-ion systems in recreational boats, and some owners are blithely installing them without regard to their unique properties.

Li-ion batteries must have sophisticated battery-management systems and unique overcurrent protection — they can't simply be dropped in to replace conventional wet-cell batteries. Doing so can cause the batteries to experience "thermal runaway," which is a polite way of saying they can catch on fire and be almost impossible to extinguish. An ABYC committee is working to develop standards that boatbuilders and boat owners can use to safely install Li-ion battery systems, including specific requirements covering installation, battery-management systems, and safety features to prevent fires on board. The new standard will be completed in 2017, giving manufacturers and owners important guidance on how to install these potentially hazardous new products.

Instead of coming up with new standards, sometimes the ABYC issues Technical Information Reports, typically written when the subject doesn't rise to the level of a requirement. One of the most important reports to come out of the meetings concerns smoke alarms — a great idea, especially for boats with cabins, engine spaces, and other enclosed areas where there might be sources of ignition. The time between ignition and detection of a boat fire is critically important.

Unfortunately, no "marine-approved" smoke alarms are currently available. It's a chicken-or-egg scenario: Manufacturers don't make them because the industry doesn't require them, but they can't be required unless someone makes them. It's too expensive for a manufacturer to build a marine smoke detector, unless they are required, because it has to pass numerous UL tests specific to boats. The marine industry hopes that by modeling smoke alarms used in the RV industry, which already have to meet some of those requirements, they can be made to sell at a reasonable price for boats. Due to this work, boaters will likely soon see another life-saving device designed specifically for boats. (See "Your Boat's On Fire, Now What?" for more information on fighting fires.)

What's On The Horizon?

To keep pace with technology, safety standards are nearly always in some state of update. LED navigation lights, triple and quad outboard installations, and universal warning decals are all up for review.