The evolution of pontoon boats in recent years has been nothing short of dramatic. Today's versatile models offer so much more than just "makin' waves and catchin' rays up on the roof". 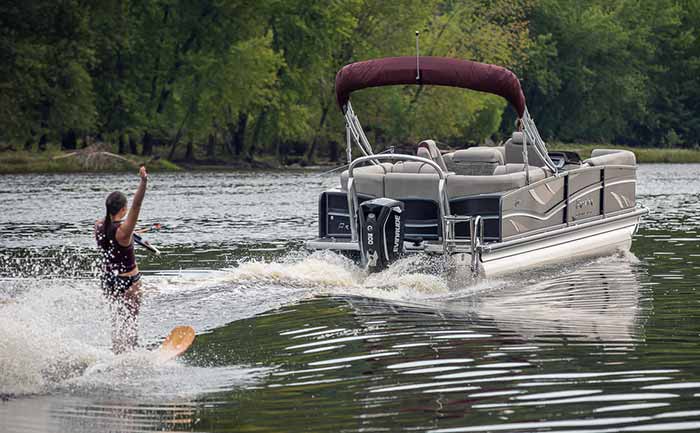 Among our diverse tribe of recreational boaters, the pontoon boat was long considered the Rodney Dangerfield of boats because it got "no respect," as in the legendary comedian's catchphrase. Then something funny happened to your grandparents' slow-moving floating platforms with their 8-knots-wide-open throttles, and today, pontoon boats are now the best-selling recreational boat design.

It started with a power boost that most never saw coming. Single 50-hp outboards gave way to 250-hp four-stroke outboards, and then twin 250s. Last year, during the Lake of the Ozarks Shootout, an annual gathering of speed demons on the popular Missouri reservoir, a pontoon boat powered with triple Mercury ProMax 300X outboards was clocked at 114 mph. Needless to say, that 25-foot triple-pontoon South Bay, named Tooned In, won its class.

Beyond this extreme example, the new breed of pontoon devotees find that more power means more options. Suddenly, towing a waterskier or tuber behind a pontoon boat doesn't seem crazy. In fact, it's a lot of fun, and plenty of people on board can now join in for the ride. Today's pontoons may not satisfy the hard-core ski/surf crowd drawn to the new breed of designated wakesurfing boats, but they can handle all the watersports of a traditional monohull powerboat.

"A lot of Baby Boomers who had fiberglass boats now have kids who may also have kids, and they want to go fast and tow skiers and tubers, but with an added level of stability and security," explains Greg VanWagenen, director of marketing for Manitou Pontoon Boats. "In most cases, with everyone comfortably seated, pontoon boats offer about double the capacity of comparable monohull fiberglass boats."

Affordability is another factor, as pontoon boats can be half the cost of specialized wakesurf boats. With pontoons, you can get a lot of boat for under $30,000.

After versatility and affordability, should we mention fish-ability? The wide beam with pontoon flotation both to port and starboard, coupled with high freeboard, makes for a roomy, stable platform from which to cast a line.

So with all of those attributes checked off, the new frontier for the more than 30 pontoon builders in the United States is creature comfort. Interior seating is becoming plusher and more adaptable, building materials are being upgraded, sound systems and electronics receive more priority, and options grow plentiful. Extended and expanded swim platforms now get more people closer to the water, and some models offer an upper deck with attached water slide to make a bigger splash.

Last year, Premier Pontoons introduced the first pontoon boat with a cuddy cabin, which has nearly 6 feet of headroom for sitting or sleeping. Other builders are adding fiberglass side panels to make the boats appear more like traditional fiberglass boats and less, well, pontoon-y.

"It's a lifestyle choice," explains Lori Melbostad, president of Premier. "We've removed the stigma. Pontoons are sexy, and with all that room, you can do so much with them. You don't feel like you have too much boat when it's just a couple, and you can never have enough boat with a group of people."

With that, let's take a look at some of the newer models. 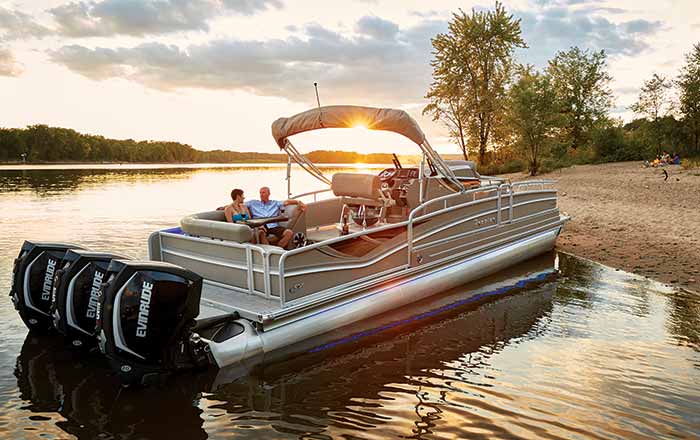 Family-owned Premier introduced 12 new models last year. Its Encounter is distinctive as the first pontoon boat with a cuddy cabin with nearly 6 feet of headroom that features a sleeper, convertible dining table, and head. Available in two sizes, both come standard with a patented PTX tube design featuring a flat-planing surface and lifting strakes on the two outer tubes that increase performance, stability, and maneuverability. Other standard features include a galley with refrigerator, front bench seat, sun lounger, and front-mount camera. pontoons.com 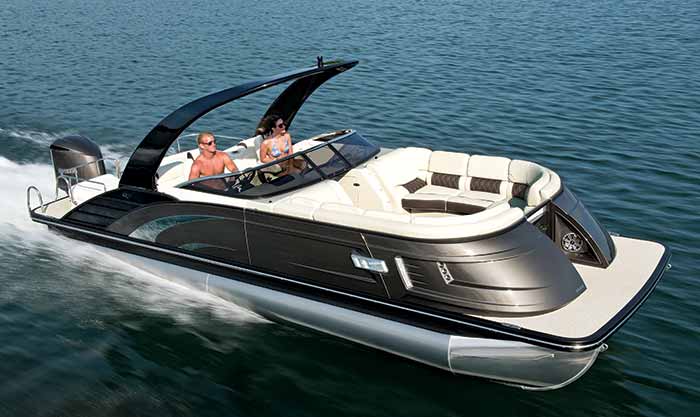 Bennington made its name as a luxury pontoon builder, and with its 25QXCW it adds fiberglass and a stylish new design to the high-grade upholstery and accessories it's known for. The dual-console model features a stainless-steel wheel with leather trim and a reclining helm seat with integrated headrest. The "co-captain console" features a countertop, bar sink, and stereo portside. Other features include a smoke-tinted walk-through windshield, cladded sport arch with embedded illuminated speakers, two stern lounges, and exterior bow speakers, an industry first. benningtonmarine.com 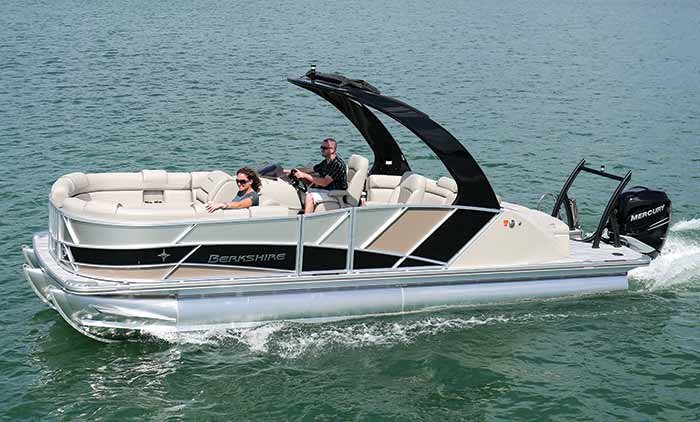 Berkshire is well-known as a performance pontoon builder, and its new 25 Sport RFX9 3.0+ is no different, starting with electric power-assisted steering. The 52-inch diameter center nose cone is 4 inches wider than the industry standard, which improves speed, hydrodynamics, fuel consumption, and riding comfort. Lifting strakes on the inside of the outer tubes produces quicker planing, better maneuverability, and a tighter turning radius. berkshirepontoon.com 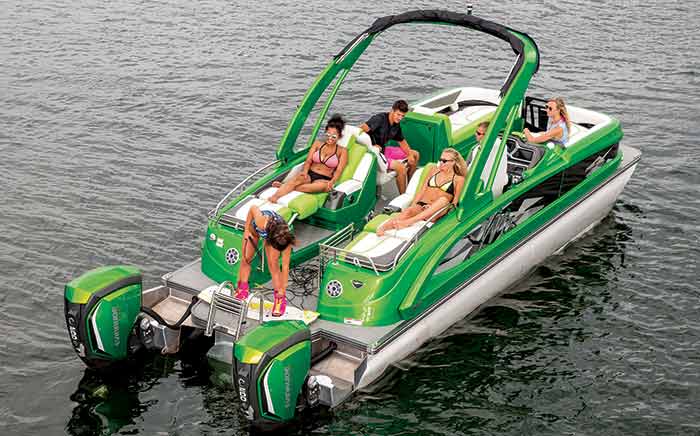 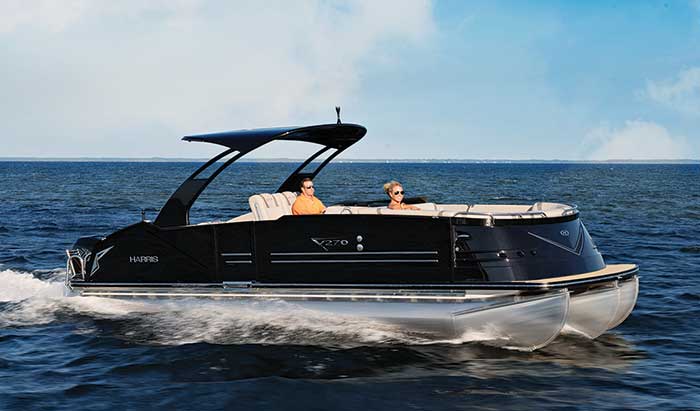 The V series from Harris introduces a unique center-console design with a fiberglass exterior that sports a curved transom. The V270 features an integrated marine head with a full pump-out toilet, sink, and shower, all recessed into the center-console. A double-gate entry on the port side makes boarding easy. Other features include ladders integrated into the deck to make the water accessible from three sides of the boat. Wraparound seating both fore and aft enhances entertaining. A galley with a faucet, sink, and optional stainless-steel refrigerator drawer with a freezer adjoins the console. harrisboats.com 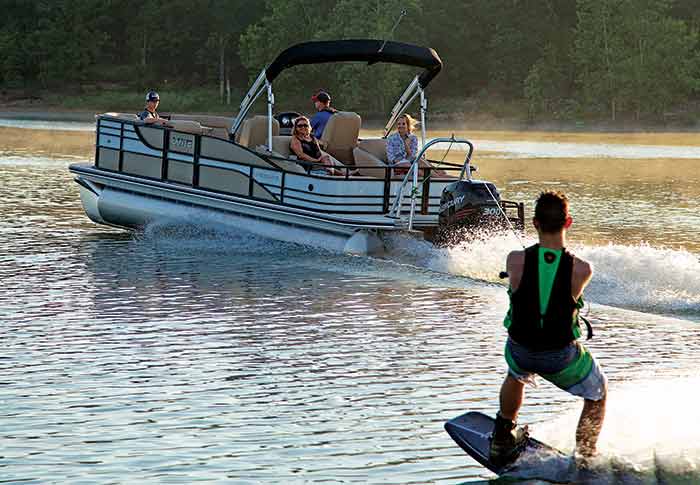 Lowe Boats may be better known for fishing boats, but it's been building pontoon boats since 1979. The new Retreat series is designed for active families looking for versatility, features, and value. The 250 RFL is named for its rear-facing lounge seating. Standard features include a 29-inch-tall fence for safety. 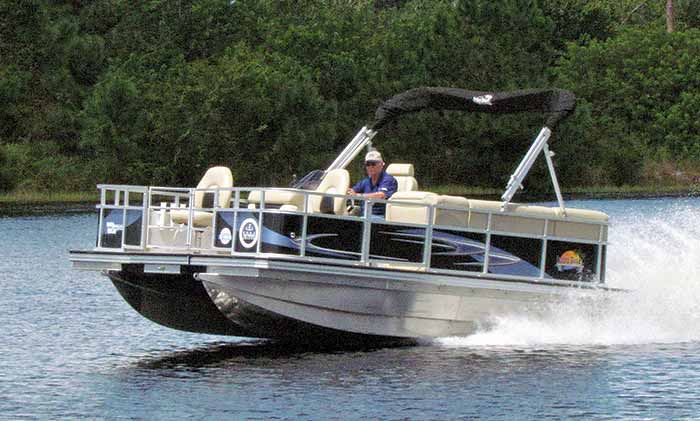 Father-son partners Ralph and Tim Poppell founded Island Boats in 2014 when they came up with a great idea for a beamy pontoon design: Make the beam retractable. The concept makes their 18/22 and 22/26 models the only two boats in the world with the patented R&E Slide, an engineering feature that allows the floor to retract or expand in less than two minutes. In the retracted position, the boats store and trailer like a monohull, even in a typical home garage. islandboats.com 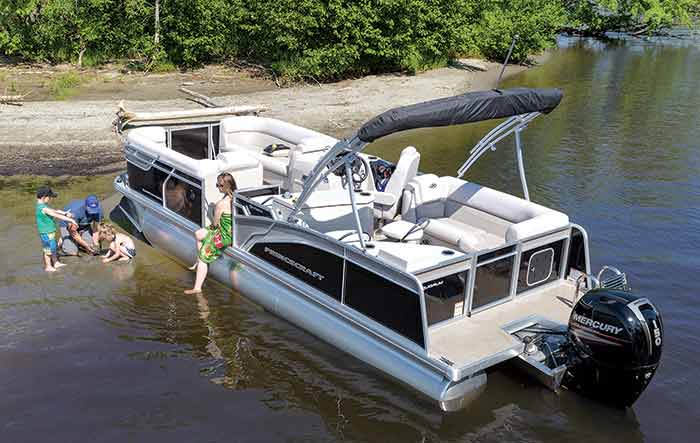 Canadian builder Princecraft has been building pontoons since 1985. Its reputation is for high-quality construction and basic, functional features. Princecraft's new Quorum 23 SE is the first 23-foot Princecraft outfitted with a bar (aft) with four adjustable stools. Other features include three chaise lounges; a rear swim platform with V-shaped engine pod to maximize platform space; three access gates; a sliding/swiveling captain's chair; and a fiberglass helm console with windscreen and integrated cooler. princecraft.com