Anatomy of a Nor'easter

This first cousin of a hurricane can pack a breathtaking punch. Treat this type of storm with great respect, and prep for it with a few simple precautions. 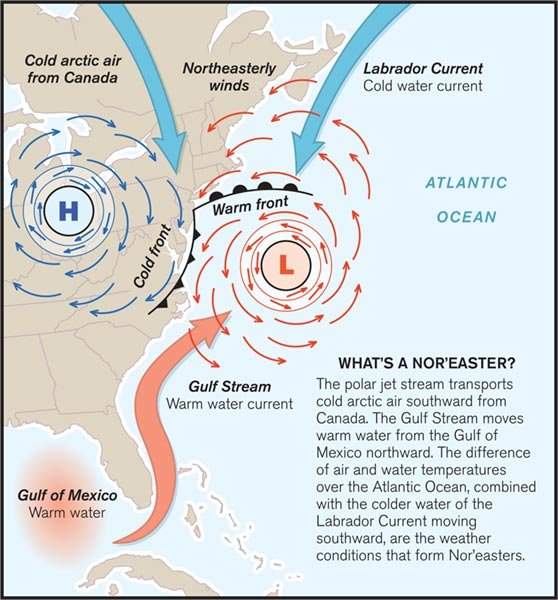 October 25: The camera shows a windblown TV anchor describing an approaching "killer hurricane." Later that night, the storm arrives, lashing a 60-mile stretch of coast with 100-mph winds before moving inland and dissipating. Damage is estimated at $1.2 billion. Three people lose their lives.

October 29: From his desk, the same TV anchor calmly mentions a dangerous winter storm approaching. Up to 7 inches of rain and sleet are expected. The storm pounds 1,200 miles of coastline for three days with offshore winds reaching 60 mph and producing tides 4 feet above normal. Beaches are eroded; power is out for hundreds of thousands. Damage is estimated at $1 billion. Six people die.

Our BoatUS Marine Insurance claims files show that nor'easters cause widespread damage, especially to boats. Sometimes the damage is as simple as a chafed line causing hull damage or a grounding. If the boat grounds on rocks, the damage can be bad. Heavy rain or snowfall associated with nor'easters can sink a boat if cockpit scuppers become blocked with debris, snow, and ice.

In a review of the BoatUS claim files, we found one 23-foot sloop that chafed through its mooring line, washed ashore, and grounded on some particularly nasty rocks, causing the boat to be holed. It was subsequently declared a total loss. A few dollars' worth of chafe protection would have allowed this boat to be bobbing at its mooring the next spring. In another claim, a boat was at a marina when a line chafed through. Because of the extreme high tide caused by storm surge and from constant chafing of docklines, the boat was impaled on its own pier.

Nor'easters Are The Bomb

Meteorologists are sometimes puzzled when the media dramatizes hurricanes while seeming to pay mere lip service to the ferocious winter storms termed "nor'easters." Technically known as "extratropical cyclones," nor'easters usually form between October and April and can affect the entire U.S. East Coast. Often, they start as small low-pressure systems originating in the central or southern United States. The strongest ones generally start in the Bahamas or the Florida peninsula. The most dangerous storms are formed when a high-pressure system blocks the northward movement of the low. Winds blow clockwise around a high and counterclockwise around a low. When these two systems meet, they act like two giant gears, ejecting winds in a generally northeast direction.

When the high-pressure system stops the movement of the low, the entire system produces onshore winds from a relatively stationary area, creating large waves and extreme tides. Where the two meet is also the area of most rain, sleet, or snow, frequently causing flooding. Rapidly intensifying storms with a pressure drop of 18 to 24 millibars in 24 hours are known by the catchy meteorological term "bomb." They've been described as a hurricane and a blizzard combined. This extreme form of nor'easter typically pounds the East Coast once or twice each winter.

An intense nor'easter is bad enough on its own, but a long-lasting storm may span several high tides. The situation worsens when a storm occurs during higher spring tides. During a nor'easter, strong winds blowing from the same direction for several days can pile water against the land, frequently causing water levels in bays and rivers to rise dramatically. Water levels in other areas can fall dramatically. Normal ebb tides are disrupted, and the water stays at high levels. Spring tides may also exacerbate the problem. According to the National Oceanic and Atmospheric Administration (NOAA), during a nor'easter, low tides can be higher than average high tides. Storm surges of 2 to 4 feet and higher are typical.

According to NOAA, as many as 30 low-pressure systems may affect the East Coast in an average winter. Don't be lulled by the frequency of these lesser fronts. Even with new supercomputers modeling potential storms, forecasters say that low-pressure systems can rapidly develop into bombs. Pay attention to forecasts especially during the months of December through March.

Charles handles our exclusive Reports in-depth tech feature in every issue, our videos, and our investigative features. He helps with dispute-mediation and writes our Consumer Protection column. A member of the National Association of Marine Surveyors, he’s on ABYC tech committees, and has a 100-ton U.S. Coast Guard license. A sailor who went cruising with his family, he now lives in California.