Make sure you know how tall your mast is before you go under powerlines. 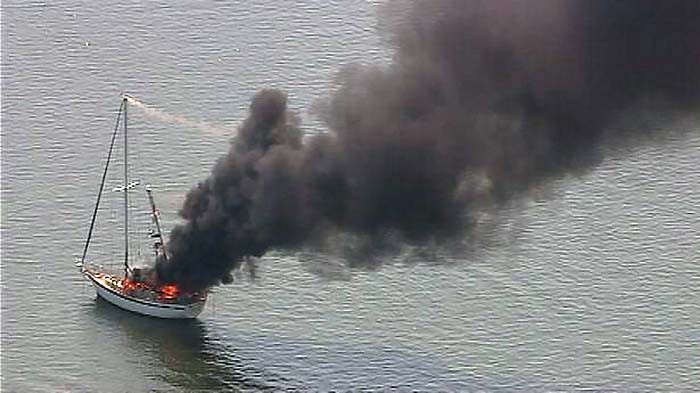 Earlier this year, we wrote about lightning (see Striking Lightning Facts, January 2015), your odds of being struck and what kind of damage an errant lightning strike can do. But there's another source of lethal electricity that can destroy a boat and cause serious injuries and even death — power lines. Last year, a 43-foot sailboat hit a power line in Florida after leaving the Intracoastal Waterway, and the boat caught fire. Fortunately, no one was injured.

High-voltage power lines can carry hundreds of thousands of volts across rivers and bays, and there are plenty of them on the ICW. Power lines that cross navigable waterways are marked on charts with their clearance listed as the height of Mean High Water (MHW), which is an average of several years of high tides. If the power lines are near a bridge, their lowest clearances are required to be higher than the bridge. But the clearances are accurate only in the marked channels — outside of that, the lines may be much lower. Be certain of your mast height (also called air draft) and the power line clearance before you go under them. Don't forget to add the height of your mast-mounted VHF antenna — usually an additional 36 inches. Keep in mind that if you have safely gone under a power line in the past, it's no guarantee that it's still safe; the water level may rise from tides, flooding or controlled damming, or the line may expand and sag from heat. Also, look out for downed or sagging lines following storms or high winds. Keep in mind that if the tip of the mast or antenna should come close to high voltage lines, the electrical current may be strong enough to bridge the gap and flow to the boat.

According to the U.S. Coast Guard, should your boat come in contact with a power line, don't jump into the water. The electrical charge may pass through your boat and electrify the surrounding water. The safest approach is to stay in the boat and avoid touching anything metal. Leave the boat only after it has moved away from the line.

It's not just on the water where power lines can be dangerous. BoatUS claim files show that other boats have hit power lines while at launch ramps. A few years ago a Seaworthy editor was pulling his 22-foot sailboat out of a boat ramp at a small lake in Washington state after a sail with his family. He brought the boat to the staging area to lower the mast and prep the boat for the road when he was startled to hear what sounded like angry bees near the top of his mast. The sound turned out not to be angry bees, but an angry high-voltage line that was not far from the top of the boat's aluminum mast. The boat was quickly moved away from the power line and the mast lowered. If anyone had been touching the mast and the electricity jumped from the line, they could have been electrocuted. The small-boat ramp was not designed with sailboats in mind; a boat with even a slightly taller mast could have created a disaster.

Look up and carefully scan the area for power lines before raising your mast — and don't forget to check again as you bring the boat out of the water. Older launch ramps are more likely to have low power lines that can snag an unwary sailor.