Where To Mount A Radome For Best Performance

No matter how big, how powerful, or how expensive your radar is, its performance may be limited by the way you mount the antenna. 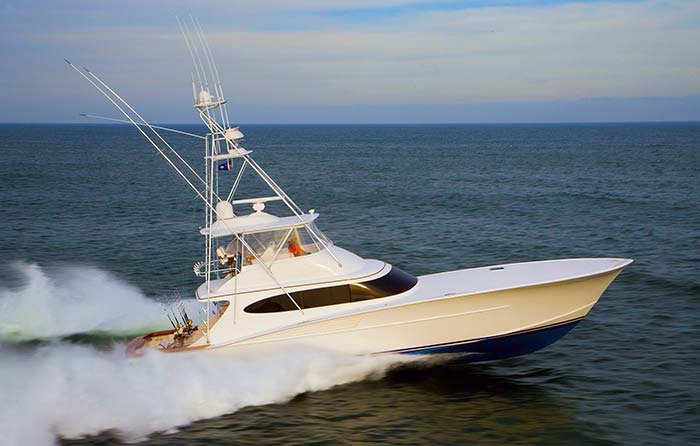 Most fast powerboats run with a slight bow-up angle, which can be compensated for by placing a wedge under the dome or array during installation. In the case of some custom or semi-custom boats, this angle may already be built into the radar-mounting platform.

The radome or open-array antenna sitting atop your boat is your radar's eyes and ears, and like the eyes and ears upon your own head, the way it's situated can make a world of difference in what it sees and hears. When it comes to radar, of course, the way it sees is the way it hears. Think of your radar antenna as a loudspeaker and microphone, all in one. The loudspeaker shouts — with a microwave pulse — and the antenna listens for an echo. Then the processor crunches a few numbers and, voila, a blip appears on your screen. 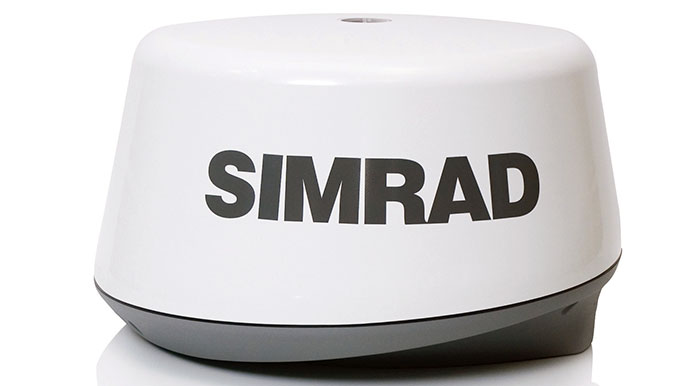 The radar antennas on most boats today transmit microwave pulses with a magnetron, then listen for those reflections that bounce back from solid targets. A mathematical calculation using the amount of time the pulse takes to be reflected determines the exact distance to the target. The latest technology, Broadband radar, broadcasts a continuous transmission wave that increases in frequency as it moves away from the radome, hits a target, and is reflected back. The unit's brain then uses the difference between frequencies of the transmitted and returned waves to determine target distance.

When it comes to mounting a radar antenna, higher is better, to a point (see sidebar). First off, getting the dome above head level is a must because you don't want to bake yourself and your crew with microwave pulses every time you use the radar. (This is less of an issue with Broadband, which emits a much lower burst of power.) Beyond the safety concerns, height is important because the biggest limiting factor relating to radar's performance is the Earth's curvature. Those microwave beams can't be bent to follow that curvature, so the height of your radar antennas and the height of the target you're looking for will always limit the distance your radar can see. Ready for some basic math?

For example, a radome mounted 12 feet off the water might first spot a small powerboat, with a maximum height of 9 feet, at a distance of just under 8 nautical miles. No matter how big and powerful your radar may be, no matter how much it cost, you can never expect it to see beyond that. Nor will it commonly see all the way out to this range; this is merely the maximum you can hope for. Target shape and density, atmospheric conditions, and other variables usually will have an effect on range as well.

Sailboaters have a natural advantage regarding height because they have a tall mast to work with. But in some cases, back-stay or post-mounting options make more sense. This is a judgment call: Is it more important to you to gain range, or to have easy access to the radar antenna? Do you need to use the radar often when heeling? If so, you need a mount that matches your needs, and this may affect whether you use the mast or go a different route (see below).

Higher Is Not Always Better

On a sailboat, the greater range of a radar mounted on the mast must be weighed against these advantages of mounting it lower:

Powerboaters, on the other hand, may need to add a mast or pedestal to gain elevation if they want to maximize range. How much is necessary? The above equation holds the answer, but for those of us who aren't math whizzes, let's use the example of a 35-foot cruiser with a hardtop that's elevated 10 feet over the water.

Never cut the plug off a radar cable during installation. Damaging the cable's shielding will reduce the radar's performance.

If you mount the radome right on that hardtop, you'll be able to see a 300-foot-tall building or water tower on shore from just over 25 miles off. You'd see a 100-foot-tall freighter at around 16 miles. And you'd see other boats of the same size as yours at around 8 miles. Raising the dome 10 feet above the hardtop on a mast does add range; however, not as much as you'd think. That tall building might now be visible at just over 26 miles. The freighter could appear onscreen at 18 miles. And a boat like yours would come into radar range at around 9 miles. So is an extra nautical mile of collision warning worth it? 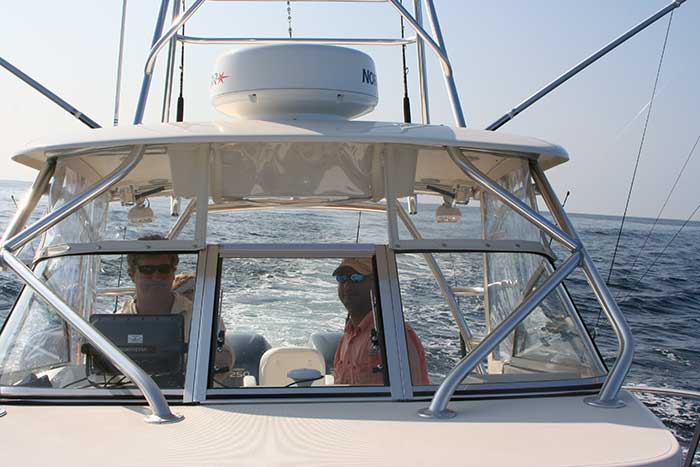 The first consideration in mounting a radome is to get it above the heads of the crew to avoid blasting them with microwave energy.

Given that a boat traveling at, say, 30 nautical miles per hour takes two minutes to traverse that mile or, worst case, two boats of similar size and speed headed directly at each other take one minute to close that gap, you may decide the answer is no. You'll have to decide exactly how much range is enough, and how much height is therefore enough. Remember, radar is most often needed for collision avoidance, when visibility is restricted. For radar to operate well in close, how you mount your radome matters.

Remember the "cone of silence" from the TV show, "Get Smart"? Radar suffers from its own cone of silence, which is affected by the angle at which your antenna is mounted. Once you know how high you'll mount your antenna, you need to determine the angle at which you'll mount it. There's another big difference here between sailboats and powerboats. Most modern planing powerboats run with a bow-up attitude while sailboats cruise at a more or less flat angle. Sailors (and owners of displacement powerboats) can skip this part and simply mount the dome at zero degrees.

The rest of us will want to pick up a clinometer (an inclination meter), which will tell you the angle at which your boat runs. These cost less than $20, can be found at any West Marine, and are used by sailors to determine angle of heel. You can also get an app for Android and iPhone smartphones for a couple of dollars that will do this accurately. Even though you should travel slowly in poor visibility, and therefore off plane, this angle may still have a noticeable effect on radar performance and it's worth figuring out what it is.

Powerboaters will orient the clinometers fore and aft in the boat, making sure it reads zero while the boat is at rest, then run the boat at a moderate cruising speed, on calm water. The clinometer will tell you the running angle of your boat, which is usually somewhere between three and six degrees. Now you know what angle wedge you'll need to keep that radar antenna at the ideal angle when you're running. Note, in the case of some large boats and custom-built boats, the manufacturer may predetermine the mounting angle and build it right into the hardtop or mounting area.

These few degrees may not seem like a big deal, but radar beams are functionally narrow, vertically, offering around 25 degrees (12.5 degrees above and below the centerline) of effectiveness. Not correcting for your boat's running angle can leave a large area around your boat uncovered, the cone of silence. At the same time, the narrow angle of the beam means mounting your radome way up the mast of a sailboat can have a similar effect, putting targets close to the boat "under" the radar and rendering them "invisible."

Sailboaters have another issue to address, as their boats tend to heel for long periods of time. When a sailboat's heeling, the leeward side sees a reduction in range and on the windward side, close-in targets may be missed in some of the unit's sweeps. The best solution is putting the antenna on a gimballed mount, which stays level as the boat heels. The downside to this solution is expense — a good gimballed mount can cost as much as some inexpensive radar units. Another option is to mount the dome in such a way that it can be adjusted for heel on the fly. Some mounts have a manual clamp, but these don't do you any good if your antenna is mounted out of reach. If it's too high up on the mast for manual adjustment, you can also mount an electric-leveling device (essentially a trim tab) athwartship under the radar antenna and use it to level out the heel when necessary.

When post-mounting, if possible mount the radome on the boat's starboard side. Masts, rigging, and gear are bound to cause some shadowing (blockage of the radar's signals). Boats to starboard are most often the stand-on vessel; therefore maximizing the radar's view in this direction makes sense.

Let's say you've decided on the best mounting option for you and your boat. The next question is, who will mount that antenna? This is a fairly easy project that most competent DIY mariners can handle. But a few cautions are in order because the most common radar installation problem is cable failure. And often, that failure results from the installation job.

Don't try to cut the plug end off a radar antenna cable and think you'll be able to splice it back together properly, and don't stress a wire while pulling it through pipe work or a chase. If the shielding of a radar antenna cable takes even minor damage, saltwater may intrude and eat the cable from the inside out. In fact, protecting the radar antenna's cable should be considered a top priority. Treat it gently during installation, and make sure it's supported with cushioned clamps.

If you have any doubts about your ability to install the antenna and cable, don't attempt it. You can always go to an NMEA-certified electronics installer and have confidence that the job will be done right. Remember, that radar is an important tool in your arsenal of safety gear, and you need its eyes and ears to be as sharp as possible.

how to diy install and repair accessories