Consumer Advocacy: Getting to Yes

At some point, every manufacturer or dealer experiences a problem with one of their products. What's important is what the company does to resolve the situation. 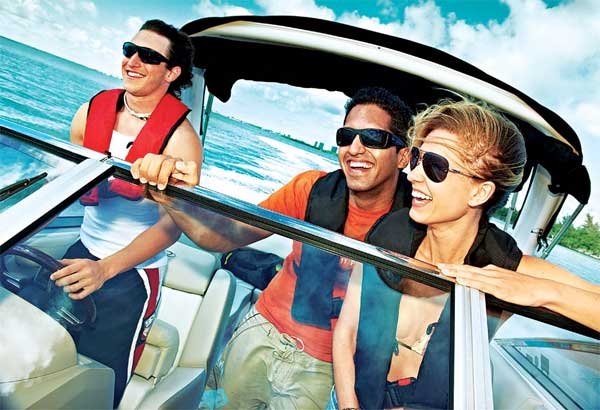 While it can't solve every dispute, BoatUS Consumer Protection tries to put the smile back on boaters' faces. (Photo: Volvo Penta)

Inherent in any transaction is the potential, once in a while, for misunderstandings between manufacturers and customers when it comes to the products that we buy. Sometimes, a product doesn't live up to expectations. Sometimes, communications may be unclear. And sometimes, honest mistakes are made. Helping to resolve these disputes, and therefore keeping boaters in boating, is what BoatUS Consumer Protection has been doing for more than 40 years.

By involving our Members and manufacturers in the BoatUS mediation process, we've been able to resolve thousands of complaints. Over the years, we've found that most marine companies are ethical, reasonable, and strive to solve problems. Those companies know that there are two sides to every disagreement, and understand the value of retaining long-term customers. As a neutral third party, we're able to open communications, and elevate them when necessary, while reducing the emotion level, which often leads to a solution. While we can't resolve every complaint, we're successful in many cases. Here's a sampling of disputes over the last year that were resolved after BoatUS Consumer Protection became involved.

These companies demonstrated their commitment to customer service by responding to our members' concerns and participating in finding a solution. In future issues, we'll honor more companies that recognize the importance of excellent customer service after the sale.

Like many boat owners, Roger Steinert likes doing his own maintenance. A few years after buying his new 2007 Bayliner 212 from a dealer in New Jersey, he followed the detailed instructions in the owner's manual and winterized his engine. Steinert did everything by the book; unfortunately, the manual supplied with his boat showed a winterizing procedure for a different engine. The following spring, Steinert found that his engine block had cracked over the winter. The manual, he later learned, didn't mention a couple of key places to drain water from the block.

The Solution: Faced with over $5,000 in repairs, Steinert contacted BoatUS Consumer Protection, and we contacted Mercury's parent company, Brunswick, which owns over 30 marine companies. Brunswick responded promptly and sent Steinert a check for the full amount of the engine — and a new owner's manual.

It's a good thing Larry Warfel has TowBoatUS Towing because he was experiencing transmission breakdowns and getting apprehensive just leaving the dock. After the port transmission of his 2005 Rinker 410 Fiesta Vee failed while underway, the dealer replaced it under warranty. Not long after, it failed again. Then the starboard transmission failed. Something wasn't right.

The Solution: BoatUS Consumer Protection was able to get Rinker involved. The company took the matter seriously, sent out a Cummins engineer to inspect the installation, and found the Cummins installation procedures hadn't been followed. The engines were misaligned with the transmissions; the engineer suggested a change in the engine mounts to prevent future problems. Cummins also found damage to the engines, due to incorrect exhaust specifications, and agreed to modify the exhaust and replace the engines damaged due to the improper installation. To their credit, Rinker, working with a local repair facility, modified Warfel's engine mounts and arranged to have the transmissions replaced, all at their expense.

D.P., a Member from Minnesota, takes very good care of his 30-foot sailboat. Wanting more secure winter storage, he bought a steel cradle from Navstore, a company in Minneapolis. After the first year, the cradle posts started to show slight distortion. Our member was worried it might eventually get bad enough to affect the boat's hull. He contacted the company but they couldn't agree on a resolution.

The Solution: We contacted the company. They visited the boat and confirmed there was minor distortion in the cradle. Even though the company said they'd never had similar problems with this model, they agreed to replace all the posts, even those not showing distortion, and recommended a different way to block the keel to avoid future problems.

After only a few months of use, one of our Members in Massachusetts discovered the insulation jacket on his ICOM VHF microphone cord crumbling, leaving wires exposed. He sent the cord back to ICOM, which quickly replaced it under warranty. A year later, the new cord began disintegrating, and after hearing about others with the same crumbling cord problem, the member called us to let us know about the problem.

The Solution: We contacted ICOM and explained the issue. ICOM stood behind their product and agreed to replace the crumbling microphone cords, regardless of warranty status.

An avid racer in Illinois bought a new roller-furling headsail for his sailboat from North Sails in San Diego. Rather than a traditional sewn-on strip of sacrificial sun cover to protect the part of the sail that remains exposed to the sun after being furled, the sail was supposed to have sprayed-on UV protection applied to the leech and foot to keep the sun from destroying the fabric. After using the sail for one season, it started to come apart right where the sun hit the fabric. It seemed obvious the UV protectant hadn't been applied.

The Solution: From the beginning, North Sails was willing to assist our Member and had offered some compensation before we became involved. But they didn't initially realize that the UV protection had never been applied. After we opened communication with them, North acknowledged that the UV protection had probably not been applied and gave the member a large credit toward a new headsail based on the use and life expectancy of the damaged one.

A Problem With An Old Fender

Our Members tend to hang on to products they buy, and their receipts. One Member in Washington state bought two Polyform fenders back in 1990. One of the reasons he bought them, he said, was because they came with a lifetime warranty. After 23 years of faithful use, one gave up and began to leak, so he sent it back to the manufacturer for a replacement. The company apologized but said the warranty only covered defects in the product and that there was nothing wrong with the workmanship. It failed, they said, due to normal wear and tear. They politely offered our Member a discount on a new fender.

The Solution: BoatUS Consumer Protection wrote to the company to get them involved in solving the problem, pointing out that the Member originally bought the fenders based on their first-class warranty. The company agreed to send our Member two fenders at no cost.

I'm writing in praise of the support and service from Dodson Boatyard in Stonington, Connecticut. Their staff went well above and beyond in our time of need last summer. Each June my father and I race our J30, Magan, in the Off Soundings Spring Regatta from Watch Hill to Block Island, then around the island. Typically there are 100 to 135 boats in this regatta. Each year Dodson opens their marina to the racers for dockage and moorings the night before the race as boats travel from all over the area. Upon my arrival at our boat, I noticed my father looking under the weather. He seemed to be having flu symptoms, so I gave him the keys to my car and he headed off in the launch to go home. It turned out he was having heart complications.

Upon hearing the news that my father was in the hospital, the marina allowed us to keep the boat on the mooring so we could tend to him. I had no car at my disposal and a taxi service had an hour-and-a-half wait. The marina offered to drive me to the hospital in one of their company cars. It was an unexpected offer, one I quickly accepted. In the end, luckily, my father was OK. Dodson Boatyard is first rate, always going above and beyond for their customers. That simple but gracious offer of a ride to be with my father will always be with me.