Here's what happened when a sailboat skipper made a near-fatal navigation error, and ended up hard aground on a falling tide.

Late one night, off the south jetty at California's Oceanside Harbor, a 40-foot sailboat grounded hard in the darkness. This is the story of how some fast-thinking captains made a series of smart decisions that saved the boat from becoming a total loss. When the call from the stranded skipper arrived at the office of TowBoatUS San Diego, the towers went into action, quickly loaded their 34-foot boat, TowBoatUS Shelter Island, and got underway. Time was of the essence; the grounded sailboat was an hour away. The overwhelming concern was the tide, which was at its peak and would be falling by the time they arrived. If the stricken sailboat couldn't be pulled off quickly, there would be almost no chance it would survive through the cycle to the next high tide. 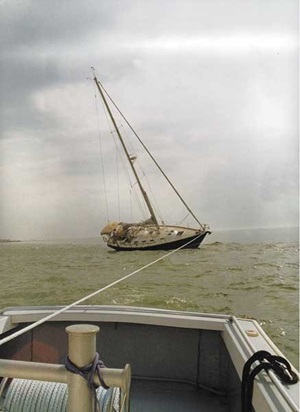 Once TowBoatUS Shelter Island arrived, shallow water forced the towers to stay almost a quarter-mile away from the jetty, which meant that 1,200 feet of 1/2-inch towline would have to be taken to the sailboat through breaking waves and against an outgoing tide by a swimmer Captain Shane Thompson. This would've been all but impossible with nylon rope, but the crew had taken time to load a remarkably strong Amsteel Blue line, which floats. When Thompson reached the sailboat, he used his upper-body strength, the buoyancy of his life jacket, and a boost from a passing wave to climb aboard.

Thompson quickly secured the towline to the sailboat's windlass and foredeck cleat. Captain Robert Butler then ordered Shelter Island's engines to be set at one-third power. The sailboat's bow swung away from the rocks but wouldn't move forward. At three-quarters power, the engines' turbochargers kicked on, and the sailboat finally started inching slowly toward deeper water. But with a rapidly falling tide and almost a quarter-mile to go before the sailboat reached open water and safety, its progress was far too slow.

Butler reluctantly ordered the engines opened to full throttle. The reason for his caution had to do with something towers refer to as "tripping," which can occur when cross swells, towline angle, and the pitch of the stranded vessel cause the towing boat to roll over. The best defense against tripping is to keep the two boats aligned perfectly.

With the engines wide open, the sailboat began moving steadily forward, jumping a few feet each time it was lifted by a passing swell. About a half-hour into the salvage, the sailboat's windlass could no longer take the strain and pulled out of the foredeck. But the cleat continued to hold. Shortly before dawn, TowBoatUS Shelter Island's crew had towed the sailboat safely back out to deep water. Remarkably, there was no serious damage. The time it took for the towing crew to load their boat, travel almost 40 miles to the jetty, devise a strategy, swim the towline ashore, then gradually maneuver the sailboat back to open water was a little over four hours a textbook example of what it takes to complete a successful salvage on open water.