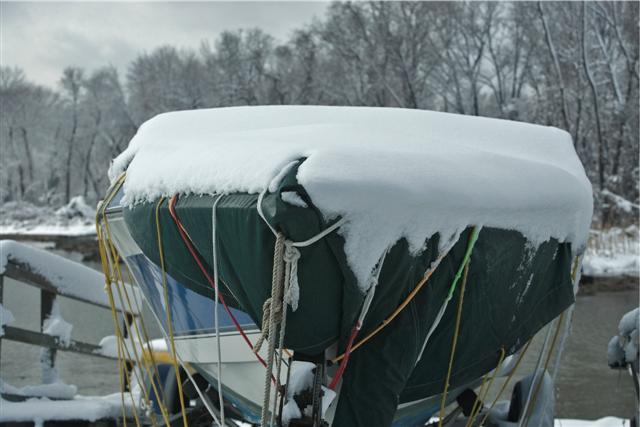 In some parts of the country, where winter means several months of bitterly cold weather, storing boats ashore is the norm. In warmer climates, however, ice and snow may occur infrequently, and the choice between storage ashore and storage in the water is open to discussion.

Storage in the water means you might get a jump on the boating season next spring. On the other hand, boats stored ashore (on high ground) won't sink. If you have a choice, storage ashore is a safer bet.

Storage ashore may also be less expensive over the life of a boat, since a hull surrounded by air for several months each winter is less likely to develop blisters than a hull that remains in the water. These blisters occur on many boats when water soaks into the laminate below the waterline.

One note of caution: The vast majority of the claims in temperate states involved boats that were being stored ashore. Since water retains heat longer than air, boats surrounded by air are more vulnerable to a sudden freeze than boats surrounded by water. Even a brief cold spell that lasts only a night or two can do considerable damage. In temperate states, boat owners must winterize engines and freshwater systems, especially when boats are stored ashore. In deep freeze states, boats stored ashore must be winterized earlier than boats stored in the water.

To say that a boat is better off stored on land is to assume it will be resting on something that provides adequate support. According to one industry expert, three times as many boat hulls are damaged by mishandling ashore than are damaged in the water. Some of the boats on shore are damaged suddenly when they are blown over by windstorms. Many others, however, are damaged slowly because hulls were distorted in storage, creating problems ranging from poor engine alignment to broken stringers and bulkheads. It is wise to remove as much weight as possible from the hull before you have it hauled. Emptying the water tanks is a good example. However, it normally is not wise to mostly empty the fuel tanks because of condensation and problems related to ethanol.

The most reliable support is provided by custom-made cradles, which are designed specifically to support critical areas of a boat--its engines, bulkheads, and keel. (Don't store your boat on a cradle that was built for a different model boat.) Steel cradles are best, but wood cradles will also do the job if they have been inspected for deteriorated wood and corroded fastenings. Shipping cradles are probably OK, but most will require some modification to improve lateral support before they can be used for winter storage.

Despite the advantages, storing cradles in the off-season is often a problem at many crowded boatyards, which instead rely on a combination of screw-type jack stands, blocks, and timbers to support hulls. Most boatyards do a competent job of positioning the supports, but it never hurts to discuss technique with the yard manager before the boat is hauled.

You could also take a cue from commercial vessels, which have their own blocking plans indicating where blocks and jack stands should be placed to provide the best support for your boat. Manufacturers may be able to supply you with a plan, or you can work with the yard manager to devise one yourself using a diagram of your boat. Save the plan and give a copy to anyone who hauls the boat in the future.

With jack stands, the stand should be perpendicular to the hull so it directs the boat's weight toward the ground. Misalignment of the stand will force it out as the load is applied. Even if the stand is aligned perfectly, safety chains must be used to prevent stands from slipping out from under the hull.

Jack stands should be placed as far out from the boat as practical to support the boat in high winds, with at least three per side for boats over 26' and additional supports at overhangs. Plywood must be placed under each base to prevent its sinking into mud, sand or asphalt. Even when stands rest on clay that seems brick hard, they can be loosened by heavy spring rains, shift, and spill the boat.

While jack stands must be placed properly to prevent the boat from falling over, most of the boat's weight usually rests on its keel. Some boats have specific requirements for support of the keel, but at least one manufacturer warns against putting weight on the keel. If the marina manager isn't familiar with your boat, check your manual or contact the manufacturer.

Keels must be supported by wide timbers or blocks — the wider the better to distribute the load. On powerboats, additional support is usually recommended for inboard engines, fuel tanks, and heavy machinery.

With outboard and outdrive boats, weight should be taken off the transom by lowering the drive units onto a block in a manner consistent with the manufacturer's recommendations.

After the boat is blocked, sight along the hull and keel to make sure the jack stands aren't depressing the hull. (You should also check in about two weeks, after it has settled.) The boat must also be level, or water could pool and cause stains, mildew, and/or gelcoat crazing. Finally, never secure the boat's winter cover to the jack stands or support blocks. There are many accounts in the claim files of boats that fell over after stiff winds filled the covers and yanked the supports from under the boats.


Storage on Racks and Trailers

An increasing number of boats are being stored ashore on dry storage racks. These racks are designed to support "typical" boat hulls, but can't always be adjusted to support unusual or atypical designs. If you have doubts about the support provided by a rack, consult a marine surveyor or consider an alternative winter location such as a trailer, which has adjustable rollers and pads to support critical areas. The exception is deep-draft sailboats. Trailers are designed to support these boats when the wind is on the bow and are rarely wide enough to provide adequate protection for certain boats (typically, racing sailboats) when strong winds are on the beam. To provide additional lateral support, use extra jack stands along the hull and unstep the mast to reduce windage. Centerboard boats will probably be OK on a trailer, especially if they are secured to the trailer's frame and the mast is unstepped.

Tying down a boat stored ashore provides great extra protection from high winds, particularly on the beam. This should be done with straps or non-stretch lines running from strong points on the boat (such as mooring cleats) to securely attached pad-eyes or similar hardware on the ground.

how to diy winterization