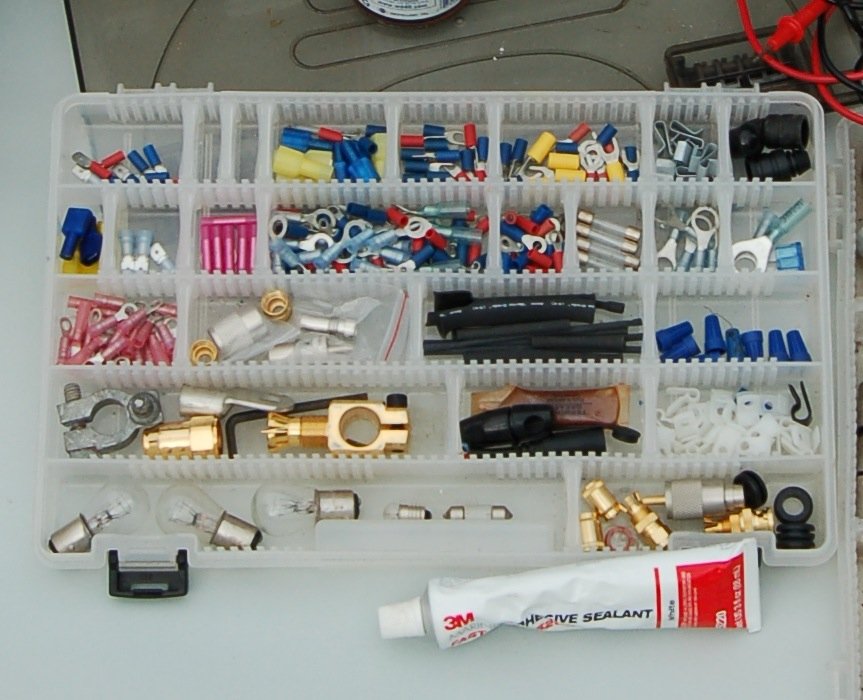 There's nothing quite like a boat for testing an electrical circuit to its limits! At the best of times the cables and terminals must put up with a combination of the omnipresent salt atmosphere and vibration (the United States Coast Guard requires fuel tanks to be tested at up to 25 G's); at the worst of times these cables may be totally submerged in bilge water, or dripping with engine oil, or cooked at high temperatures. All too often, salt infiltrates terminals and wicks up conductors, causing corrosion and electrical resistance; vibration causes copper conductors to work harder and fracture; and oil and high temperatures degrade insulating properties, leading to short circuits. As electrical efficiency declines, equipment fails, and in worst cases fires are started.

Ancor cables, terminals, and heat-shrink tubing are claimed to be built to meet these demanding standards. Properly installed, they will ensure the integrity of electrical circuits for many, many years to come.

Proper installation is primarily a matter of sizing a cable to match its tasks, using the correct tools to attach terminals, and providing adequate overcurrent protection with fuses and circuit breakers.

Cable sizing is simple enough. It is a function of the length of a cable (measuring from the power source to the appliance and back), and the current (amperage) that will flow through it. This can be found by checking the label on the appliance in the circuit, or the specifications sheet for the appliance. The longer the cable, or the higher the amperage, the bigger the cable must be to avoid unacceptable voltage losses. And there should always be plenty of extra margin for safety because an appliance may actually use more current than what it is rated for because of heat, low voltage, extra load and other factors.

For 12-volt circuits, the relationship between cable length, current flow, and cable size is given in the two tables below. Note that Table 1 presupposes a 3% voltage loss in the cable, while Table 2 presupposes a 10% voltage loss. What this means is that when the circuit is fully loaded (i.e. operating at rated amperage), the voltage at the appliance will be 3% or 10% below that at the battery. For example, if the battery is at 12.6 volts, the appliance will be seeing 12.2 volts (3% loss), or 11.34 volts (10% loss).

The cable sizing tables are used by running across the top row until the column with the relevant amperage is found, and then moving down the left-hand column until the row with the relevant distance is reached. The number in the body of the table at the intersection of this row and column is the wire size (in something known as the American Wire Gauge); the lower the number, the bigger the cable! Use this wire size (gauge) to find the correct product. But don’t hesitate to go to a heavier (fatter) wire than the table indicates.

Many appliances (notably lights) will run fine with a 10% voltage loss, but others are particularly sensitive to such losses (notably charging circuits, and some electric motors). In general, given the harsh realities of the marine environment, it's better to use the 3% volt drop table when sizing cables, rather than the 10% table. There's never a performance penalty if a cable is marginally oversized; there is always a performance penalty (and possibly a safety hazard) if it's undersized. ABYC and the United States Coast Guard require a not to exceed 3% drop for circuits involving the safety of the vessel or its passengers and in other cases.

The ground (negative) cable is as much a part of a circuit as the positive cable; it must be sized the same. In general, each appliance should be supplied from the distribution panel with its own positive and negative cables, although lighting circuits sometimes use common supply and ground cables to feed a number of lights (in which case the supply cables must be sized for the total load of all the lights).


* Current (amps) determined by adding the total amps on a circuit.


* Current (amps) determined by adding the total amps on a circuit.

The terminals are the weak link in an electrical circuit. If installed incorrectly, they're likely to create power-robbing resistance. Since resistance causes heat, fires can result from improperly installed terminals. Crimp-on terminals have gained universal acceptance in marine wiring, but to work effectively they must be put on with the proper tools. For marine electrical work you need a wire stripper (rather than a pocket knife, which is likely to nick the copper strands in the conductor), and a decent crimping tool. The crimper needs to be matched to the terminal size being crimped, and should preferably make a double crimp, once on the conductor and once to grip the insulation for strain and fatigue relief.

For the ultimate in terminal protection and longevity following crimping, a connection can be protected with a length of glue-lined, heat-shrink tubing. Properly applied, this will make the connection watertight; the connection should last the life of the boat.

Overcurrent protection is a frequently misunderstood subject. Its need arises from the fact that if a short circuit develops in onboard wiring, high current flows occur, generating heat and causing cables to melt down. If the short is a serious one (a "dead short"), cables can burst into flames, setting fire to the boat and its surroundings. Electrical fires are among the most common fires onboard.

Fuses and circuit breakers, which collectively are known as overcurrent protection devices, are the primary defense against electrical fires. To be effective, they must meet two conditions: they must be properly sized for their circuit, and they must be placed as close as possible to the electrical source for the circuit.

There are two columns in the ampacity table-one for use outside engine spaces, and one for use inside engine spaces. The reason for this is that engine rooms are usually hot. Even before a circuit is turned on, a cable is warm. In these conditions it takes less current flow to bring the cable to a dangerous temperature than it does in a colder environment; hence, the de- rating in high ambient temperatures. If any part of a circuit runs through engine room spaces, the lower ampacity rating is used to determine the proper overcurrent protection for that circuit.

To be effective, overcurrent protection devices must be installed as close as possible to the source of power for a circuit. In fact, the ABYC recommends that circuits be fused within 7" of their connection to a power source. There are some exceptions to this recommendation, notably cranking circuits (these require no protection at all), circuits that are connected directly to a battery post (in which case the 7" is extended to 72"), and cables which are housed in a sheath (in which case the 7" is extended to 40"), but in general the point needs to be made: every circuit should be provided with a properly sized overcurrent protection device at the circuit's connection to a power source. If you've got a bunch of cables hot-wired to your batteries with no overcurrent protection, not only are these circuits not recommended, but you're also inviting a fire!

Circuit breakers and fuses are available for anything from a fraction of an amp up to 800 amps. There are also available a wide array of fuse blocks and distribution panels for mounting these fuses and circuit breakers. The complexity of wiring considerations can be seen in the following and above tables, all of which indicate that wiring should be done by an ABYC certified specialist unless you really know what you are doing and can follow ABYC standards.

Other important points to bear in mind when wiring boats: