We've analyzed insurance claims over the past 20 years, and discovered the best ways to help you prepare your boat to survive a hurricane.

There's an old adage that experience is the teacher that gives you the test first, and the lesson afterward. BoatUS Marine Insurance has been collecting evidence of lessons learned — what worked and didn't work when boats were prepared for hurricanes — since the first BoatUS Hurricane Catastrophe (CAT) Field Team was organized after Hurricane Gloria in the fall of 1983. 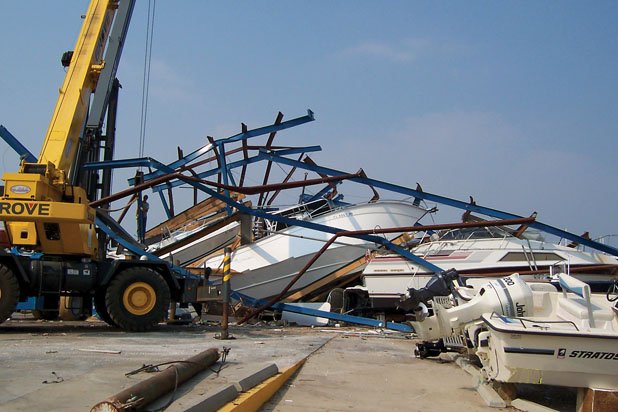 Most skippers know that boats need to be stripped of sails, Biminis, and anything else that's removable and creates windage. Adding extra lines when a boat is in the water is also critical. However, what follows are some lessons that may not be so obvious. It's a good idea to learn them now, before nature gives you the test.

People who've watched boats that were stored ashore in hurricanes report that jackstands used to support the hulls can be rocked back and forth ever so slightly in sudden gusts. Over time, this movement can work the jackstands out of position, making it more likely that the boat will be blown over. While boats ashore tend to suffer less damage than boats left at docks, the extent of damage ashore can be significant — cracked hulls and broken bulkheads.

In the past few hurricanes, a technique has emerged that promises to greatly reduce damage to boats stored ashore: Strap them down securely to some sort of secure anchor, such as eyes set in concrete or helical anchors drilled into the ground. With either type of anchor, straps with little or no stretch work best; ordinary nylon line stretches, which can buckle the leeward jackstands. The technique has proven to be so effective, even when storage lots have been flooded, that BoatUS Marine Insurance reduces its policy's hurricane deductible from five percent to three percent for boats that are hauled, anchored to the ground, and prepped to reduce windage. 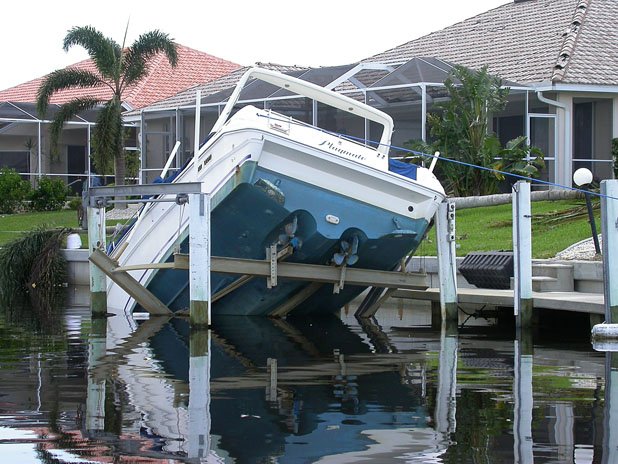 While floating docks with tall pilings have proved to be one of the best places to secure boats in hurricanes, one of the most vulnerable, paradoxically, is floating docks with shorter pilings. The shorter the pilings, the less likely they'll be able to accommodate the surge; it's not uncommon for every dock — and all of the boats — at a marina to be lifted above the pilings and carried away. That's what happened at Masonboro Marina in North Carolina, as well as Bayland Park Marina in Texas, to cite but two examples, where dozens of boats wound up in battered clumps ashore. If a significant surge is anticipated, boats at floating docks with shorter pilings should either be hauled out of the water or moved to a more sheltered location.

WORST: Boats At Marinas Protected Only By A Low-Lying Seawall

Boats at marinas that are protected from a larger body of water by a low-lying seawall or spit of land are especially vulnerable to surge. Once the surge rises above the protection, breaking waves will quickly wreak havoc with boats, no matter how well secured. The only option in these instances is to store boats ashore or move them to another marina or hurricane hole that offers better protection.

A study by MIT after Hurricane Gloria found that boats stored ashore were far more likely to have survived unscathed than boats stored in the water. Some boats are especially vulnerable, especially small open boats with low freeboard that are likely to be swamped by heavy rains. Note, however, that "ashore" in some low-lying areas might be under five or six feet of water during a hurricane. It's important that boats be stored on high ground — the higher the better — above the anticipated surge.

Over the past few decades, new boats have been built with increasingly wider beams. The width of marina slips, however, has remained largely the same. If your boat's slip is tight, securing dock lines to accommodate the surge will be much more difficult. Too much slack and the boat will be slammed into pilings; too little slack and the boat won't be able to rise with the surge. True, a nylon line's ability to stretch can help; but the higher the surge, the greater the likelihood the lines will be stressed and broken. There are devices available that can be added to the lines or pilings that can help the boat rise up and down with the surge. Another technique is to use longer lines tied to more distant piling. The best alternatives, however, would be to move your boat to a wider slip, move it to a hurricane hole, or, even better, have it hauled (and strapped down) ashore.

After an especially ferocious storm with hurricane-force winds came blasting through, the Port of Astoria, a public marina in Oregon, required all of the boat owners at the facility to replace their dock lines. Sound unreasonable? It's not. The well-regarded publication Practical Sailor tested older dock lines that had been exposed to several seasons of UV deterioration, dirt, salt, and repeated stretching. The study found that the various lines had lost between 49 and 75 percent of their original strength. A key factor to the rope's deterioration was the loss of the factory-coated polymers that lubricate each fiber. While a good deal has been written about the need for chafe protection in storms, not much has been written about the lines themselves. That's too bad, because the Practical Sailor study indicated that whenever a storm is predicted, it would be prudent to have a second set of "storm dock lines" (sort of like a storm anchor) at the ready. 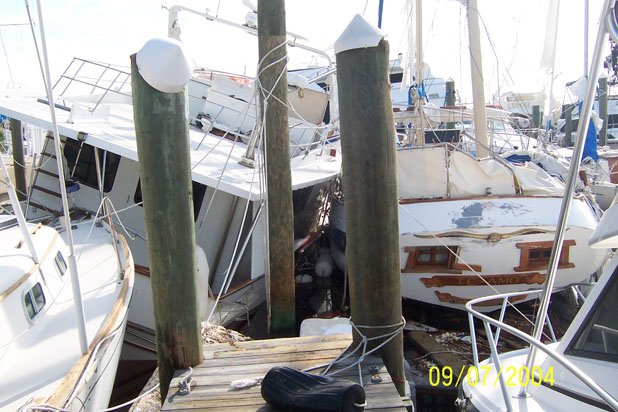 WORST: Boats On Davits And Lifts

When asked, "Where wouldn't you want your boat to be during a hurricane?" just about all of the BoatUS CAT Team members said they wouldn't want the boat to be on a hoist or lift. Damage to boats on lifts has been high and includes boats being blown off, bunk boards breaking and spilling the boats, boats grinding against motors and pilings, boats being overcome by the storm surge, and boats filling with rainwater and collapsing the lift. Whenever possible, boats on lifts should be stored ashore or moved to a safer location in the water.

One of the more interesting innovations to come out of Hurricanes Bob and Gloria, which clobbered the New England coast 20 years ago, has been the development of the helical anchor, which is screwed into the bottom using specialized equipment and offers tremendous holding power, even when scope is reduced. A study by the BoatUS Foundation, Cruising World, and MIT in 1993, found that a 500-pound buried mushroom anchor could be pulled out with 1,200 pounds of pull (supplied by a 900-hp tug); an 8,000-pound dead weight (concrete) anchor could be pulled out with 4,000 pounds of pull. A helical anchor, however, could not be pulled out and the strain gauge recorded 12,000 pounds of pull — its maximum — before a shackle burst apart. (In an earlier test with a larger tug, a strain gauge registered 20,800 pounds before the hawser snapped.)

Port Marina, a dry-stack facility in Fort Lauderdale, Florida, has received a lot of publicity for its ability to stand up to winds of more than 140 miles per hour. So, too, have River Forest Yacht Centers in Stuart and LaBelle, Florida, whose dry-stack storage buildings are billed as offering boat owners "safe harbor during hurricane conditions." At the same time these dry-stacks are being touted as one of the best solutions to reducing hurricane damage, other dry-stacks have been among the most visible hurricane casualties. In Hurricane Wilma alone, three large steel storage racks with thousands of boats were collapsed by the storm's 115-mph winds. In Hurricane Ike, a dry-stack facility in Galveston, Texas, collapsed and burned. How old is old? In Florida, construction standards in most counties were upgraded after Hurricane Andrew, which means that newer racks — those built after 1992 — are far more likely to have been built with more (and heavier) structural supports.

BEST: Make Plans Before A Hurricane Warning Is Posted

This is the granddaddy of all lessons: Make plans before a hurricane warning is posted. If you own a boat in a hurricane-prone area, the first step in developing a preparation plan is to review your dock contract for language that may require you to take certain steps or to leave the marina when a hurricane threatens. Ask the marina manager what hurricane plan the marina has in place. It may be that you can join a "Hurricane Club," which would allow you to have your boat hauled whenever a hurricane warning is posted. Note that BoatUS Marine Insurance will pay half the cost, up to $1,000, to have your boat hauled prior to a hurricane, or moved by a professional to a safer location, or for the professional execution of a hurricane plan.