Researchers find that alcohol is a factor in many adult drownings. 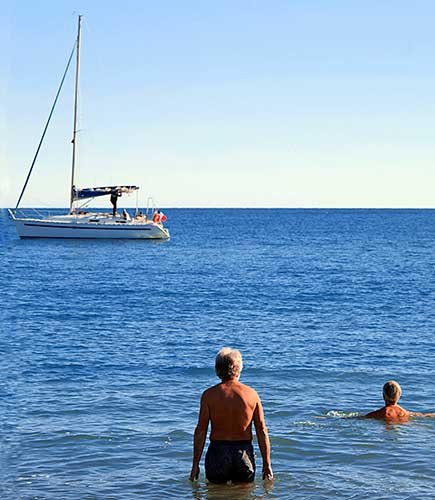 After a few drinks at a popular Florida resort, a group of friends climbs aboard a boat for a moonlight tour of the harbor. About midnight, despite a 20-knot wind and choppy seas, they decide to go swimming. The engine is shut down and the boat is allowed to drift in a channel that's about 200 yards from a deserted island. Shortly after they enter the water, the wind begins sweeping the boat away. The engine is started and the boat backed up toward the swimmers. One by one, the party climbs back aboard but a 40-year-old woman is missing.

Since the woman had not alerted any of the other swimmers that she was in trouble, everyone remains optimistic. But despite a lengthy and increasingly frantic search, the woman is never found.

Experienced skippers should quickly recognize the obvious risks that were taken that night: the decision to go boating in the dark after drinking; the decision to go in the water in blustery conditions, and the foolish way the boat was backed down toward the swimmers. But the risks that are obvious to most people were lost to those aboard that night.

It's no secret that alcohol often causes people to take foolish risks while at the same time inhibiting their ability to think quickly and cope in critical situations. What many people do not realize, however, is the extraordinary number of drowning deaths that involve alcohol. Seventy five percent of all boating deaths are the result of drowning, according to the Coast Guard. And while estimates vary, studies have shown that alcohol may have been a factor in about 50 percent of all adult drowning deaths. Some studies put the figure as high as 70 percent. Drowning is the second leading cause of unintentional deaths among adults 20 to 44 years old.

Obviously, anyone who is dead drunk is going to have trouble swimming. But many of the people who drown are not legally drunk and researchers have found several reasons why even moderate amounts of alcohol may affect a person in the water.

In the case above, the victim was a good swimmer and in good health. She probably had considerably less to drink than some of the others on the boat. Her dinner, according to police interviews with her peers, consisted of a salad and two glasses of white wine. A combination of alcohol, too few carbohydrates, and exercise — in this case, swimming — meant that she ran the risk of developing hypoglycemia, which is a drastic reduction in a person's glucose levels. Hypoglycemia causes sudden weakness, confusion and affects the body's normal temperature-regulating mechanisms. Medical researchers warn that alcohol and aquatic exercise without taking sufficient carbohydrates represents a "foolish confrontation with death."

Not all swimmers enter the water voluntarily. At least 25 percent of the drownings are caused by falls overboard, according to the Coast Guard (88 percent were not wearing life jackets). Boats are inherently unstable anyway, and when someone has been drinking, the tendency to fall overboard is that much greater.

The Coast Guard conducted tests to document the effects of environmental stressors — sun, wind, wave motion, glare, and vibration — on a boat operator's reaction time and error rate. What they found was that these stressors produced a kind of boater's hypnosis, a fatigue that reduced the operator's performance much as alcohol would. But when operators were both intoxicated and exposed to environmental stressors, they missed 10 times as many cues as operators who were merely exposed to stressors.

Environmental stressors and alcohol can combine to cause many boating accidents, including falls overboard. Both stressors and alcohol were probably factors in an incident (Claim #0242617) involving a young skipper and the accidental drowning of his friend. After spending most of the day sunning, sailing, and drinking beer on his small boat, the man stumbled and fell into the chilly New England waters. He was unable to climb back aboard and tried to swim ashore. His body was recovered two weeks later.

Hypothermia, a lowering of the body's core temperature, may also have been a factor in this case. Hypothermia causes swimmers to become sluggish in water as warm as 60 degrees. Alcohol inhibits the body's signaling system so that swimmers don't realize how cold they've become. Although it is rarely listed as the cause of death, researchers believe hypothermia is a contributing factor in as many as half of all drowning deaths.

Besides hypoglycemia and hypothermia, there are other ways that alcohol affects someone in the water. Sudden cooling of the skin can cause caloric labyrinthitis and/or hyperventilation, which may have contributed to the drowning death of a swimmer on a balmy spring day on the Potomac River (Claim #932487A). The victim, an experienced swimmer, had been talking and drinking beer aboard an anchored boat in a quiet cove when, perhaps to cool off, he jumped into the water. He was never seen again.

Caloric labyrinthitis, an inner ear disturbance associated with sudden temperature drop, causes a person to become disoriented and explains why swimmers may sometimes swim down instead of up. Researchers believe that alcohol may increase the chances of caloric labyrinthitis as well as hyperventilation. Hyperventilation can cause a person to gasp and "breathe in" water.

Many drowning victims are strong swimmers. A professional diver hired to retrieve a fishing rod drowned after only a few minutes in the water. An autopsy disclosed a high blood alcohol content. While it can never be known exactly why he drowned, investigators had little doubt that alcohol was a major factor (Claim #062509A).

Many people drown within easy reach of other swimmers. Children have drowned within a few feet of their parents. "She was splashing and playing and then suddenly she was gone" was the way one parent described the last few seconds of his daughter's life. "She never called for help."

Recognizing drowning behavior is especially important because researchers have found that someone who is drowning lacks the lung capacity to call for help. Drowning victims act instinctively, moving his or her arms as though climbing a ladder, taking quick gulps of air, and then slipping back underwater. With an adult, this reflexive behavior lasts about 60 seconds before the victim sinks underwater for good. With a child, drowning behavior lasts only about 20 seconds. The struggle is quiet, and often looks "playful."