After The Hurricane: Lessons from the BoatUS CAT Team

The CAT Team has accumulated an unparalleled body of knowledge on what works and doesn't work when boats are preparing for hurricanes. 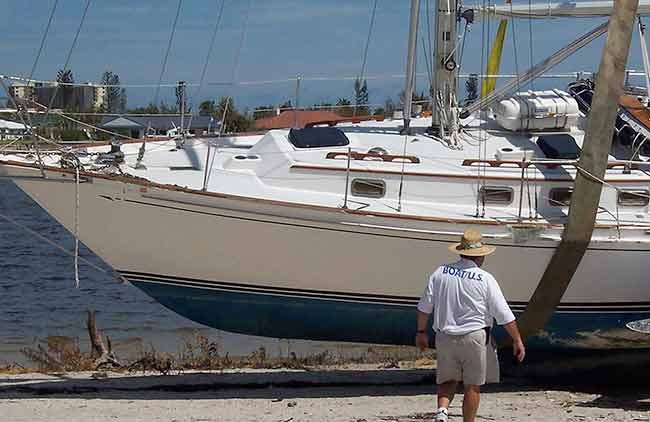 The founding of the BoatUS Hurricane Catastrophe (CAT) Team goes back to the fall of 1983 when Hurricane Alicia devastated much of the Texas Gulf coast, including the newly built outer harbor at the Houston Yacht Club. Dozens of boats that had been in the harbor came ashore and were piled, one on top of the other, in a massive clump that proved to be a daunting challenge to would-be salvors. BoatUS, which insured many of the boats, had been in touch with the club's officers and volunteered to send several BoatUS employees to the Houston Yacht Club to, in the words of one employee, "do whatever we could to help clean up the mess."

Bill Oakerson, who was part of the original group, said Houston was the start of a learning process that has continued to expand with each new storm for almost three decades — how to evaluate would-be salvors, set up staging areas to store damaged boats, and negotiate contracts. Thanks to the CAT Team, BoatUS members' boats have typically been at the front of a very long line of boats waiting to be repaired. And when members' boats could not be repaired, the experience of the CAT Team has meant that salvage boats are sold to minimize the impact to the BoatUS insurance program.

Seaworthy talked to several of the senior members to see what lessons they have learned that might help members prep their boats for the next inevitable storm.

Mike McCook: I've been working with the BoatUS CAT Team almost 30 years, and I've seen a lot of boats that were destroyed. Typically, the cause could be traced to the vulnerability of the boats' locations and/or the lack of preparation. There have been exceptions. One that stands out was in Galveston after Hurricane Ike. There was a beautiful sportfisherman whose owner had done a thorough job of stripping the boat and adding many more lines, all of which were well protected from chafe. Rather than relying on his usual docking arrangement, the owner had also used longer lines that were led to more distant pilings, which had given the boat a much better chance of rising with Ike's 15-foot surge. Finally, the boat had been stripped of anything removable that would have created windage. But despite being a textbook example of how to secure a boat in its slip for a hurricane, the sportfisherman had sunk.

The owner's mistake was that he had placed far too much faith in the dock's aging bollards, which were secured to the concrete docks with badly rusted bolts. 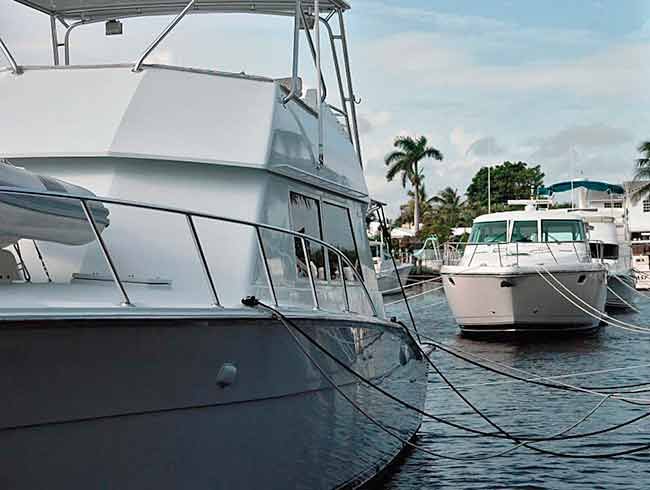 The bollards were yanked out and the edge of the boat's stern was pushed up onto the bulkhead during the surge. When the water receded, the edge of stern was left high and dry while the remainder of the boat was left dangling at an awkward angle down to the water. The cockpit flooded and the boat rolled over and sank.

A lot has been written on the importance of a marina's location; marinas that are only protected by a low-lying seawall or spit of land are not a good place to secure your boat in a hurricane. I also think it's important to look at the condition of the marina — rusted fittings, worm-eaten pilings, and narrow slips will put your boat at greater risk in a storm.

From Jonathan Klopman: In theory, canals should be an ideal place for a boat in the water during a hurricane; most are well protected with almost no wave action. The surge can be dealt with by tying boats off in the center of the canal with more and longer lines to accommodate the surge. In my experience, however, canals may not offer any more protection. All it takes is for one absentee owner to leave their boat poorly secured, and it can break loose during the storm and become a wrecking ball. The end result may be that the boat gets tossed up in someone's backyard.

The solution is relatively simple: Boat owners who live on a canal should work together to devise a "community plan" for all of the boats. The meeting should also involve the property owners to work out permission on how the boats can be anchored to trees or anchor points in lawns. This includes keeping spools of line on hand for making longer lines to shore, compiling a list of which boats will be leaving before boats are tied off, and deciding who will prep boats if some people are unavailable. The end result of a collective effort should be more boats surviving the storm and far fewer boats on lawns, in living rooms, or sunk in the canal.

Other things to keep in mind when boats are stored in canals: Boats that were tied with the usual four lines have proven to be vulnerable. The lines must be tied with as much scope as possible and drawn up tight. Any slack left in the line will allow for shock loading and the lines could snap like a guitar string once the boat starts heaving in the surge. Boats raised up on lifts are not protected — they will either get tossed out of the slings or slammed against the pilings and holed. They should be taken down and either stored ashore on their trailers or tied off in the canals. 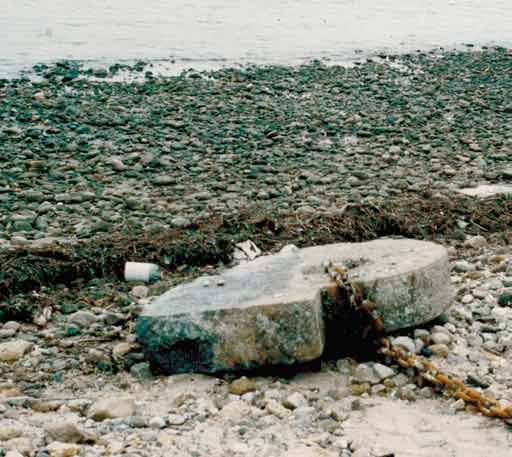 David Wiggin: After Hurricane Gloria swept up the coast, I recall the beaches were littered with boats that had only been anchored with homemade concrete moorings. People had poured concrete into things like tractor tires and bathtubs. That was it. There were also moorings made out of large wheels or gears from old locomotives.

A few years later, Hurricane Bob came ashore in New England with the same result — boats on moorings didn't fare well. The two monster hurricanes changed all of that. The various New England towns that had seen their harbors decimated began mandating stricter rules on what could and couldn't be used to anchor a mooring. The homemade "anything goes" stuff has been largely replaced with helix anchors, much heavier deadweight anchors, and properly sized mushroom anchors.

Another important change since Gloria and Bob has been that there are now tighter rules about how often a mooring needs to be inspected. It used to be that the mooring components like chain and shackles in some harbors were likely to have become badly corroded before they were required to be replaced. I've been on the Bourne Shore and Harbor Committee for many years. Anything that has caused problems in the past has been addressed. Aside from replacing under-sized anchors, for example, we no longer allow the use of some foreign-made chains or shackles because they don't hold up in seawater. The old adage about a chain only being as strong as its weakest link certainly applies to moorings. 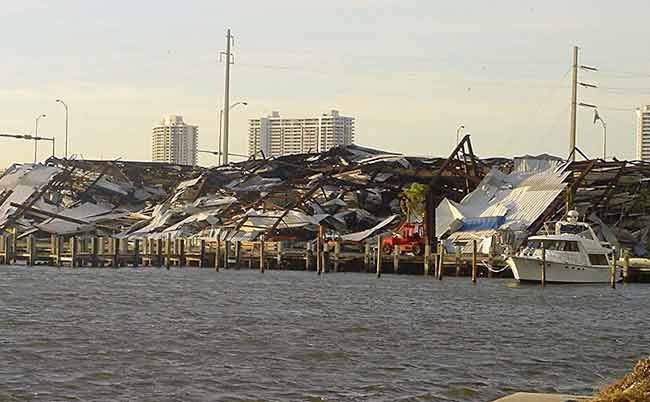 Dan Rutherford: I remember a high-rise marine storage facility — a "boatel" — near Miami that was destroyed in Hurricane Andrew and another outside of Charleston, South Carolina, that was collapsed by Hurricane Hugo. Like most storage buildings, they probably appeared to be sturdy but upon closer inspection, they lacked diagonal struts. There were gussets on the frames but gussets didn't provide the support needed to withstand a strong hurricane and the structures were blown over. There were several hundred boats stored inside and all but a few were a total loss. Collapses of rack storage buildings bring with them several other concerns, including the potential for fuel leaks, fires, and explosions. That's why the area around a collapsed building must be secured by first responders.

After Hurricane Andrew in 1992, the standards for marine storage buildings were strengthened so that a newer building is far more likely to survive a hurricane than an older, pre-Andrew facility. There have been at least a dozen of these older buildings destroyed in recent hurricanes and there are plenty of them still being used that are packed with boats. It's almost guaranteed one or more will be blown over whenever a major storm comes ashore.

If I were planning to dry-store a boat in a building, I'd begin by asking the manager when it was built and how much wind it was designed to withstand. I guarantee you that if it's a relatively new building in a hurricane-prone area, he or she will be able to answer those two questions. Of course there are no guarantees; if the eye wall of a Category 5 hurricane were to hit the rack — just about any rack — then all bets are off. And I have seen some buildings withstand the wind only to fall victim to storm surge. If it's a well-constructed building, you boat will be much more likely to weather a storm than if it were at a dock.

If you keep your boat in an older building that's likely to be vulnerable, your hurricane plan should be to put the boat on a trailer and take it inland.

Jack Hornor: Those of us who have spent weeks and sometimes months sorting out the maritime aftermath of hurricanes are seldom surprised by what we find when we visit a site for the first time. It's not long before all marinas and boatyards start looking alike, but there is one that stands out for me. It stands out not for the damage and destruction — although there was plenty of that, too — but for the lack of damage to many vessels there due to the forethought and planning of conscientious boat owners and a forward-thinking marina owner. 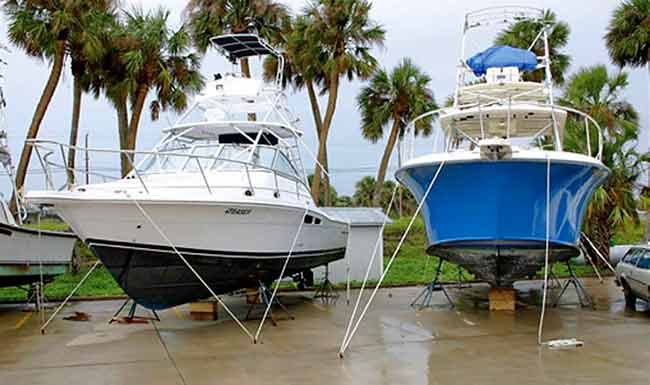 When I first arrived at Sebastian River Marina following Hurricane Frances in 2004, the entrance at the north end of the property was blocked by cranes, boat lifts, and equipment, so I turned around and parked along the eastern shoulder of US1 adjacent to the marina. I climbed down the brush and tree-lined embankment to discover a row of powerboats standing as proud and erect as Terra Cotta Warriors. None had any damage and all had been secured, with straps and lines, to anchors embedded in the concrete pads.

Anyone who had dealt with the aftermath of a hurricane knows that the greatest damage, by far, is done by storm surge, water, and waves, and not simply the force of the wind. Boat owners preparing for a storm need to get the boats out of the water and onto high ground. Tying boats down is an added preventative measure and seems to be gaining in popularity among many marinas. When recently searching out a location to store my own boat in Ft. Pierce, Florida, both Harbortown and Riverview marinas offered the tie-down service for boats in storage. Needless to say, mine is now strapped down.