The Night Dan Richter Got More Than He Bargained For ...

It started out simply enough, as a quick father-son nighttime fishing trip into Mexican waters. And then Dan drove his boat over an expensive tuna pen, and the Mexican Navy arrived.

A despondent Dan Richter and his badly damaged 29-foot Seaswirl were tied up at the Navy base in Ensenada, Mexico, this past October, when he spotted a mysterious man walking down the pier toward his boat. Dan wasn't under arrest, but he certainly wasn't free to go home, either. After a long night without sleep in a place where none of the people he'd been dealing with spoke English, Dan was almost begging to go home.

The man was about six feet tall, distinguished, with white hair and a relaxed, personable manner. He continued walking toward Richter's boat, stopping occasionally to exchange greetings with people on the pier he seemed to know. When he finally reached the boat, he smiled broadly and said, "Hello, Dan, my name is Oscar. Your lawyer Jim sent me." Dan felt instantly relieved, if only because Oscar was friendly, spoke fluent English, and wasn't wearing a uniform. But he didn't have a clue who Oscar was, and he'd never heard of a lawyer named Jim.

Getting Caught In Tuna Pens 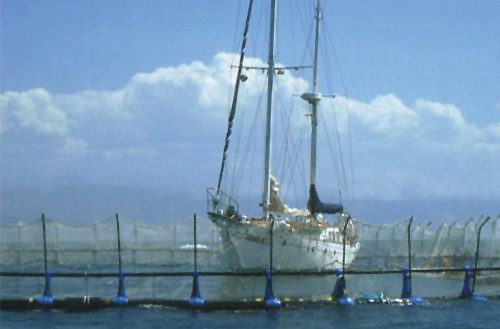 Even sailboats can be caught in tuna pens. See below.

Finding yourself caught in a fish net or holding pen can be expensive anywhere. In this case, the Mexican Navy freed Dan Richter's trapped boat, but the cost for being freed by a private towing company is considered salvage and can cost several thousand dollars. Add to that the cost to repair the net as well your boat's props, shaft, and more, and the final tab for your navigation error could be tens of thousands of dollars. These costs are normally covered by your BoatUS insurance policy.

There is yet another cost that apparently has been levied by Mexican authorities in the past: traumatizing the tuna. Todd Schwede, a marine surveyor in San Diego, says the pen owner's claim is that the tuna are traumatized and as a result won't sell as well on the open market. A single bluefin tuna was recently sold in Japan for over $100,000.

Schwede, who makes no claims to being an expert on fish psychology, says he's heard of other claims for traumatizing tuna that were as high as $80,000. He has no idea whether the fines were paid, however; unlike damage repair costs, fines are not covered by an insurance policy.

Who's Oscar? And The Rest Of The Story

The night before, Dan had been fishing off Mexico's Isla Coronado, a few miles south of San Diego, California. He and his 14-year-old son Brian had been gingerly working their way past a series of tuna pens that were marked by buoys he'd spotted on radar. The buoys were each marked by "strobes" that Dan said were more like dimly lit flashlights. Thinking he was safely past the last one, Dan powered up, then noticed something out of the corner of his eye. He swung the wheel sharply to port but it was too late; they struck an unmarked tuna pen. Even though they were only traveling at eight knots, the boat went airborne and came to rest inside the pen. Both outdrives were badly damaged, with one hanging precariously by its hydraulic cables.

Once he'd secured the dangling outdrive to the boat, Dan used the VHF to call the U.S. Coast Guard, which dispatched a patrol boat and helicopter. Very quickly, maybe a half-hour after the initial call, the Coast Guard hailed him to say the rescue vessel was getting close and requested that he shoot off a flare to mark his location. Dan complied. Seconds later, he watched a set of navigation lights getting closer and closer, which, to his surprise, turned out to be a Mexican Naval Patrol boat. Dan called the Coast Guard.

The next few minutes were, in his words, "scary and chaotic." While he was on the VHF telling the Coast Guard about his predicament, his son overheard two men on the Mexican Naval Patrol boat talking in Spanish about getting money, and told his dad. Another man stepped aboard, and told Dan to switch to Channel 11. Dan learned later that collisions with tuna pens typically resulted in large, even enormous, fines. 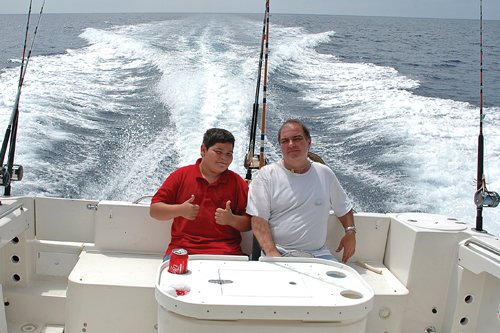 Dan Richter and his son Brian got more adventure than expected when they inadvertently sailed into a commercial tuna pen off the Mexican coast. 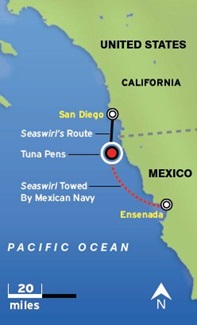 Young Brian, whose mother was born in Mexico, and who spoke perfect Spanish, began telling the men that what they were trying to do was illegal, "That pen wasn't marked. My uncle works for the Mexican Border Patrol and he will hear about this." Meanwhile, the Coast Guard arrived, and sent over an inflatable with five crew aboard. Two climbed onto Dan's boat. One of the Mexican Naval officers said they didn't want money, they only wanted to help. It was the man who owned the damaged tuna pens, however, who did want money. A Mexican Naval officer in scuba gear dove under the Seaswirl and, with the help of the patrol vessel, pulled the badly damaged boat out of the pen. It turns out that the same officer later told Brian that the accident wasn't his father's fault and gave him his contact information, just in case his father was charged for the damage.

At this point, Dan said he was becoming optimistic. The Mexican Navy and the U.S. Coast Guard had been talking back and forth, and Dan thought his boat was about to be towed back to San Diego by the Coast Guard. But they were in Mexican waters, and the Mexican Naval officers said it would be towed to Ensenada. Dan opted to stay with his boat. At his request, the Coast Guard took Brian home, but not before the young man gave instructions in Spanish about how his father should be treated.

The rest of the story involves a long list of concerned people, none of whom had ever met Dan Richter. The first was David Walker, a towing dispatcher at Vessel Assist in San Diego, who made a phone call to Fred Ventura, an emergency dispatcher at BoatUS headquarters in Alexandria, Virginia. BoatUS Vessel Assist has a very tall VHF tower, so Walker had been relaying the VHF exchanges between Dan and the Coast Guard. As soon as he heard Dan and his boat were going to Ensenada, he checked the computer and saw that Dan was insured with BoatUS Later that same night, at about 3 a.m. EST, Ventura opened a claim for Dan and forwarded it to the BoatUS Claims Department. The following morning, Kerry McCook, a claims adjuster for BoatUS, called an attorney in San Diego, James Alcantara (the aforementioned "Jim"), and asked him to do whatever he could to help Richter. Jim called a colleague in San Diego, Carla Ishno, an attorney licensed in both the United States and Mexico. Ishno called the director of tourism in Ensenada, who happened to be her uncle Oscar!

Dan may have been in Ensenada, but he certainly wasn't there as a fun-loving tourist. Still, he appreciated Oscar's visit and was willing to go along with a perfect stranger "just to get out of there." Oscar took Dan to the port master who, it turns out, had already heard from the owner of the tuna pens. Oscar and the port master started talking back and forth in Spanish. Dan listened, or at least tried to. Oscar then turned to Dan and said, "I don't know what your son said to those guys, but [the man who owns the tuna pen] wants to make a deal: If you won't press charges against him, he won't press charges against you. Just sign this paper."

Dan was surprised, but wouldn't sign anything without talking to Jim, his new lawyer. Oscar read the paper and then used his cell phone to read it to Jim. (This was when Dan learned that Jim had been hired by BoatUS) The port master looked it over. Jim said they were all shocked that the owner of the tuna pen had offered to make a deal that didn't involve Dan paying him huge sums of money. Finally, with everybody's blessing, Dan signed the paper and was told by the port master that he was free to leave.

Things were looking up, but the story wasn't quite over; Dan and his mangled boat had to somehow get back to San Diego. A man named Gerard, who "knows everybody and can get things done," suddenly appeared. It turned out that Gerard had been hired by Jim and wasted no time arranging for the damaged boat to be hauled at a marina and put on a trailer. He then drove Dan back to the border. Jim, meanwhile, got on the phone and arranged for Dan to come back across the border despite not having a passport. (Getting him through customs still took almost five hours, but that's another story.) When he finally walked back into the United States, Dan was met by Jim, who'd been waiting. The two men smiled and shook hands warmly, both feeling great relief. Dan hadn't slept for two days. Thankfully, that was about to change.

Dan Richter's advice on what he would have done differently is simple: Don't fish behind Coronado Island at night. Carry a high-intensity search light to scan waters that are used extensively for commercial fishing. Whenever you venture into foreign waters, bring your passport, even just for an overnight. He adds that it helps to have someone aboard who speaks the language; just about everyone who was interviewed for this story credits Brian for helping to get his father released without having to pay a huge fine. Finally, Dan is quick to mention BoatUS's role in helping to get him and his boat home quickly, "I can't say enough about how well I was cared for. Everyone at BoatUS was truly outstanding."