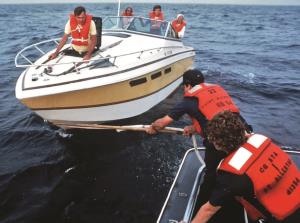 BoatUS is supporting legislation to pay members of the U.S. Coast Guard during the partial government shutdown.
Download hi-res photo

BoatUS is urging recreational boaters to ask their members of Congress for support of S.21 and H.R. 367 and offers a simple way to do that by going to: https://bit.ly/2AMDbJy.

In a January 15 letter to Sen. Thune and Rep. DeFazio, Vice President of BoatUS Government Affairs Chris Edmonston wrote, “While we understand the current debate over funding of the Department of Homeland Security is primarily about issues not directly related to the U.S. Coast Guard, we are concerned over the potential deterioration of its ability to fulfill its wide range of missions including search and rescue, boating safety regulation, and support for aids-to-navigation. We support your effort to ensure that USCG personnel will receive compensation notwithstanding the final passage of the DHS 2019 appropriation legislation. This will allow them to focus on their missions and help ensure the safety of recreational boaters.”

Added Edmonston, “Despite the current lapse in funding, thousands of USCG professionals have continued to perform critical missions regardless of their own financial uncertainty. This is a true testament to their dedication, living the Coast Guard motto, Semper Paratus — Always Ready. It is very fitting for the Congress to take action to ensure their well-being for the long term.”

Boat Owners Association of The United States is the nation’s largest advocacy, services, and safety group for America’s boat owners with more than half a million dues-paying members.