Why Are There So Many PWC Accidents? 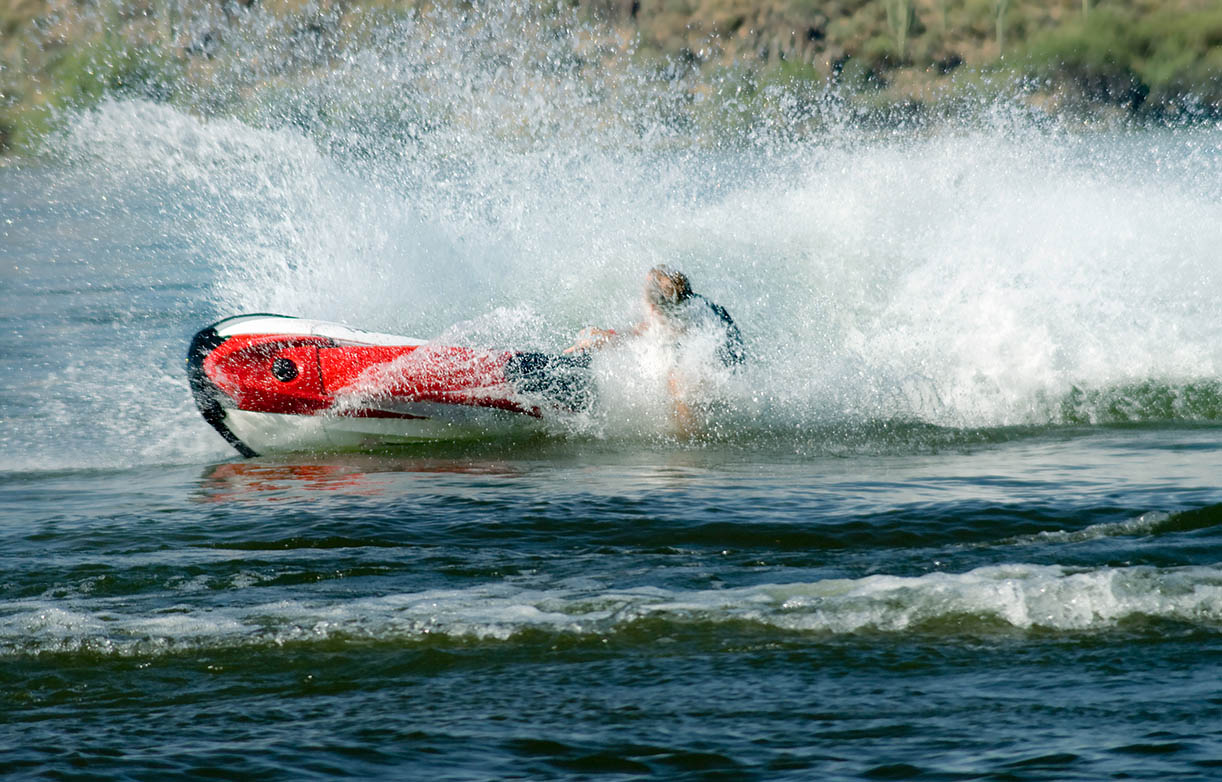 How Can They be Avoided?

What's the first word that pops into your head when someone says Personal Watercraft (PWC)? Fun? Fast? Loud? How about crunch? According to the Coast Guard, PWCs have a higher rate of collisions than any other type of boat and there are several reasons why. The same person who wouldn't dream of lending a motorcycle to someone who has never ridden one will toss the keys of a fire-breathing PWC to a neophyte without a second thought. And because of its small size, many people consider a PWC more of a dinghy than a real boat, but the fact is that a PWC is a vessel as defined by the USCG and subject to all the same rules and regulations as a 40-foot power cruiser. It could be that, due to it's quirky handling characteristics, a PWC might require more experience.

In this article, Seaworthy looks at PWC collision claims to find out why there are so many accidents and how to make riding PWCs safer.

The first thing that stood out among the claim files was that a large percentage of PWC accidents involved inexperienced riders. (USCG statistics bear this out as well — most accidents involve operators in the 11-20 year-old age group.) According to the claim files, owners were involved in only 18% of the accidents. The owner's siblings (29%) or friends (53%) account for far more accidents. Some PWC models have a special key for new riders that limits the power output of the engine — a good idea, since according to a National Transportation Safety Board report roughly 84% of PWC accidents involved operators who had no boating safety education or instruction. In fact, 73% had been riding less than an hour when their accident occurred. Forty-eight percent of those injured had never operated a personal watercraft or had done so only once.

The claim files show that nearly 70% of PWC collisions are with another vessel, the majority of which are other PWCs. Inexperienced operators who are not familiar with judging speed and distances can suddenly find themselves on top of another boat (like other boats, PWC's don't have brakes and can take up to 300 feet to stop from 60 mph). PWC's have several handling characteristics that make them completely different from most boats and take some skill to master. One of the most common types of collisions is caused by PWC's inherent lack of steering whenever water isn't being shot out of the stern. There is no rudder. Some newer models have devices that assist off-throttle steering, but the boats still have very limited slow-speed maneuverability and nearly no maneuverability at high speeds when the throttle is suddenly closed. A study by the state of Florida showed that accidents due to lack of off-throttle steering is the second most common type. Typically, an inexperienced rider releases the throttle to try to avoid another boat, a dock, or a person in the water, and looses the ability to turn. Tapping the throttle is one way to regain steering, but it also increases speed (and severity of accidents) and must be practiced. In a few claims, a collision occurred because the engine died at slow speeds, rendering the steering useless. PWC engines must be serviced routinely and allowed to warm up before taking off.

PWCs are able to turn much sharper and faster than a typical boat and the forces generated by such maneuvers can throw a passenger or even the operator into the water. Snaking into the water at high speeds can cause serious injuries. For this reason, every state requires PWC riders to wear approved PFDs and most require safety lanyards that shut down the engine if the operator is thrown off.

According to the US Coast Guard, PWCs are involved in 30% of all reported boating accidents. And 36% of all boating injuries take place on PWCs. PWC collisions result in more injuries and deaths than any other type of PWC accident. And, unlike all other types of boats, PWC operators are more likely to die from blunt-force trauma than from drowning. Most often, riders strike another boat due to inattention, excessive speed, or loss of control. The collisions typically throw the rider and passengers off the boat, often resulting in broken limbs, sometimes from simply striking the water at high speed (Claim #9608267) Broken teeth and noses are common injuries after being in a collision, usually after striking steering bars.

Other injuries are caused by falling from a PWC, most often due to wake jumping or making sudden turns. Falling from a PWC is made more dangerous when other boats, typically other PWCs, are operating nearby; after jumping a wake, a rider in Florida was thrown from his PWC and then struck by his friend who couldn't see him in the water as he rushed to his aid (Claim #207157). Fortunately, the man survived. Not all riders are as fortunate; one man was killed in Canada after he had been thrown in choppy waters and then struck by another PWC (Claim #0107305).

Wake jumping, even without falling off, also causes other injuries, from broken tailbones (Claim #0338215) to broken necks (Claim #9601828). In most areas, wake jumping within 100 feet of another boat is illegal, not only because of the danger of landing, but because often the boat making the wake blocks the view and riders can be struck by an oncoming vessel.

Excessive speed is blamed for many PWC accidents. Several years ago, at the USCG's request, most manufactures of PWCs agreed to a speed cap of 65 mph. Phil Cappel, chief of the USCG Recreational Boating Product Assurance Division, said the "gentlemen's agreement" has no teeth and the USCG would like to have a Memorandum of Understanding signed by the manufacturers which would put some authority into the agreement. The USCG has tested several PWCs and despite the fact that horsepower is rising (the original Kawasaki Jet Ski had an output of 32 hp while the most powerful on today's market has an astounding 265 hp), none of those PWCs have exceeded the self-imposed limit. Phil says it's because the size of the boats have grown — the 265-hp model is a three-seater that weighs 1,000 lbs. But some manufacturers who weren't making PWCs when the speed cap was agreed to, don't feel they should honor the speed limitation. Cappel is hoping the Person Watercraft Industry Association will help convince all PWC makers to agree to a new memorandum.

Most states have minimum ages for PWC operators, ranging from 12 to 18. In some states, younger riders are permitted to operate PWCs if they are accompanied by an adult. In other states, the legal age of operation depends upon whether the rider has taken a state-approved boater safety course. (PWCs are subject to the same rules of the road as any other vessel and meeting, crossing, and overtaking rules must be obeyed.) Nearly all states require PFD's to be worn by the operator and all riders. In addition, many states require PWC rental operators to provide instruction or education in PWC operation. Visit NASBLA for a complete list of requirements.

A PWC may look like a dinghy, but it has the power of a much larger boat. Don't loan a PWC to anyone who doesn't have experience operating a PWC in addition to basic boating skills. The waterways are too crowded and a PWC too speedy and erratic. Let him or her take a boating safety course, even if it isn't mandatory in your state, and maybe gain experience crewing on larger boats before you introduce them to all the quirky handling characteristics of your PWC. This can't be done in a few minutes by showing someone how to work the throttle, make turns, etc. The BoatUS Foundation for Boating Safety has a free online Boating Safety Course that covers many of the specific safety issues regarding PWC operation as well as safe boating practices common to all types of boats. There is no substitute for hands-on experience. Spend time instructing a beginner until you are both comfortable that he or she knows how to safely operate a PWC. Finally, since their driving at first is likely to be erratic, make sure beginners stay well away from other boat traffic — remember that most PWC accidents involve collisions with other boats.